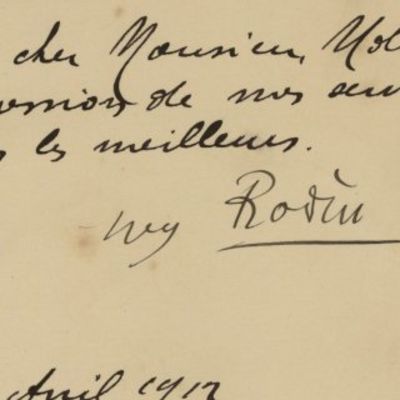 by Auguste Rodin
24/04/1912. Auguste Rodin is in many ways the father of modern sculpture and one of the most well known and recognized artists worldwide, with great museums to his legacy not only in his hometown of Meudon, France but in Philadelphia and elsewhere.  His bronze and marble statues are instantly recognizable.  Among his most well known works are representations of men and women in their unadorned forms, a symbol of how they were created and their capacities.In 1894, Rodin produced two marble, Biblically themed sculptures showing the Creation of Woman by the hand of God.  One contained a serpent, a symbol of evil, and the devil in the Garden of Eden.  The other was taller and was without the serpent.Lucien Moline was a well known French art dealer and agent who helped Rodin sell his works, as he did with several other French artists.Letter signed, April 24, 1912, to Moline.  ""As a result of my own personal confusion of the two marbles that you saw at Meudon, there has been a major error in the prices given.   The marble that represents the Creation of Woman and which contains the serpent is 70,000 frances; the other marble also representing the Creation of Woman but without the serpent and taller is 40,000 francs.""The latter remained in the artist's private collection until it was donated to his country, France, in 1916.  It now resides in the Rodin Museum in Meudon. (Inventory #: 9458)
$2,500.00 add to cart Available from Raab Collection
Share this item