Theodore Roosevelt Is Shocked That Antiwar Congressman Ernest Lundeen Opposed the Declaration of War With Austria-Hungary “Is it possible that you voted against or paired yourself against the declaration of war against Austria?...I fail to see how any good American could oppose it.” 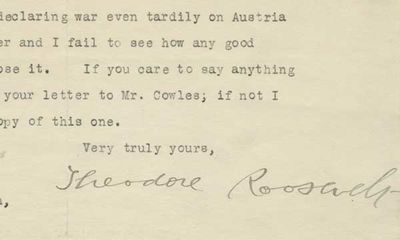 31/01/1918. Theodore Roosevelt When World War I broke out in Europe in 1914, many Americans strongly supported the Allies, and the foremost and outspoken among them was ex-President Theodore Roosevelt. TR blamed Germany for the war and its atrocities, and openly advocated taking a harsh line against that nation. there was no universal American championship of the Allies cause, and in fact many people leaned towards the German side. In fact, in 1916 President Wilson ran for reelection on the slogan “He kept us out of war,” and won. Then, on April 6, 1917, Wilson changed his stance and asked Congress for a declaration of war against Germany. The vote in Congress was 455 in favor to 56 against. One of the Republican to vote no, and a leader of the dissenters, was the populist and future U.S. Senator Ernest Lundeen of Minnesota, who followed this vote with a no vote on the conscription bill. In the months after the U.S. declaration of war, Lundeen engaged in a heated exchange, almost a debate via correspondence, with Roosevelt, one that dealt with the pros and cons of American policy, and Roosevelt’s fierce advocacy of the war and Lundeen’s continued reluctance to support it, and as importantly, delved into the meanings, characteristics and limits of patriotism, free speech, and dissent in a democracy.Wilson may have asked Congress to declare war on Germany in April, but he held off asking for such a declaration against Germany’s allies. In December Comgress declared war against Austria-Hungary; this time one socialist voted no and Lundeen paired himself no, thus becoming one of just two war opponents in Congress. This infuriated Roosevelt.Typed Letter Signed on his Metropolitan letterhead, New York, January 31, 1918, to Lundeen. “The enclosed letter from Mr. Byron K. Cowles explains itself.  Is it possble that you voted against or paired yourself against the declaration of war against Austria?  You clearly assented to my description of our duty for the future; your assert was valueless if you did not mean war with Austria, Turkey and Bulgaria.  This was an Administration measure for the efficient prosecution of the war.  The Administration was to be blamed for not asking a declaration of war against Austria long previous to the date in question, and it is now to be blamed for not asking a declaration of war against Turkey and Bulgaria.  But its action in declaring war even tardily on Austria was eminently proper and I fail to see how any good American could oppose it.  If you care to say anything to me I shall send your letter to Mr. Cowles, if not I shall send him a copy of this one.”  (Inventory #: 13562)
$5,000.00 add to cart Available from Raab Collection
Share this item