Thomas Edison Gives Instructions to His Lab For the Production of Resins Used in His Batteries and Phonograph Records Extremely uncommon full letter of Edison directly relating to his research and production. 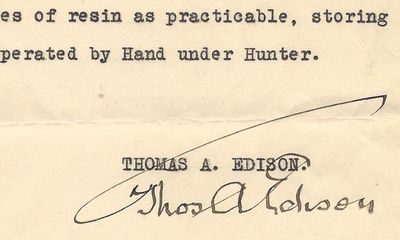 20/01/1927. Thomas Edison Thomas Edison and Electricity are almost synonymous. Edison invented many electricity-inspired devices, such as the incandescent light bulb, the phonograph, and a forerunner of the movie projector. To create the electricity, he set up the world's first electricity generation plant, and developed a complete electrical distribution system for light and power. These are are just a few of the host of his electricity inventions that laid the basis for the modern electric world. So it is not surprising that he should seek a self-generating source of electricity; in other words, a battery.Edison’s interest in batteries was long-standing and dated back to his time as a telegraph inventor. He was among the first to try to develop consumer-friendly batteries, and made important improvements in battery design, inventing alkaline batteries. He began investigating storage batteries as early as the 1880s, but it was the advent of automobiles in the late 1890s that spurred him to develop a storage battery to power them. Electrical power would, Edison felt, be a much better solution than gasoline. He stated, “Electricity is the thing. There are no whirring and grinding gears with their numerous levers to confuse. There is not that almost terrifying uncertain throb and whirr of the powerful combustion engine. There is no water-circulating system to get out of order - no dangerous and evil-smelling gasoline and no noise.” Electricity had to be the future, he wrote, since in time ”all the oil would be pumped out of the ground.” Electricity-powered cars would also be less expensive to produce, bringing the price to the consumer down.The problems the Edison lab faced with batteries for electric cars were that the lead-acid batteries that that existed then were too heavy, and the acid corroded the lead inside the battery, shortening its useful life. The Edison team would look for a way to make batteries lighter, more reliable, and at least three times long-lasting, so that they could become the basis of a successful electric car. Their idea was to use alkaline electrolytes, and make a nickel-iron based battery. Such a battery would use an electrolyte of potassium or sodium hydroxide and contain no lead or other heavy metals. It would therefore be without risk of acid spills, and its construction and disposal would be largely without significant environmental damage. The battery chemistry in a nickel-iron battery, during both charging and discharging, acts to transfer oxygen from one electrode to the other. Resins form a film on the electrode surface, retarding corrosion. The battery Edison ultimately manufactured was so efficient that it lasted for decades.He established the Edison Chemical Works in 1905 to manufacture the iron and nickel compounds to be used by the Edison Storage Battery Co. (ESBCo). Around 1916 Chemical Works became a division of ESBCo, with Edison's brother-in-law John V. Miller continuing as manager and Charles F. Hunter serving as superintendent. William J. O'Dair was their product engineer. It took over a decade to develop a commercially viable iron-nickel battery, and by that time automobiles powered by internal combustion engines had become dominant. Had their battery been available sooner, the economic, political, and environmental history of the world might look very different. Though no longer primarily focused on cars, their battery work carried on for decades, and they made constant improvements. Edison developed an extensive market for his battery in a variety of industrial uses, and it was the most successful product of his later life.Edison used resins not only for his batteries, but for his phonograph records. He was by far the largest consumer of resins in the country, and was always looking for new, more efficient and less expensive methods of producing it. Here we find him switching to a new apparatus, but wanting to make sure the old one was ready to produce if the new one was down. He also wanted to be sure any excess produced would be stored for later use.Typed letter signed, The Laboratory, Orange, NJ, January 20, 1927, to superintendent Hunter. “The apparatus used with old method of making resin to be put in good condition ready to operate should any emergency occur. The new process without pressure to be operated to make resin for current use and as great excesses of resin as practical, storing the excess operated by Hand under Hunter.” An extremely uncommon full letter of Edison directly relating to his research and production, one of a very few we have ever had.Edison Storage continued to manufacture batteries until 1972, and in 1975 it was sold to Exide, then one of the world's largest producers and distributors of batteries. After the 1975 sale, the head of Exide discovered a small file of Edison’s papers, and retained them. We acquired the file directly from his family, and this letter has never been previously offered for sale. (Inventory #: 8980)
$8,500.00 add to cart Available from Raab Collection
Share this item