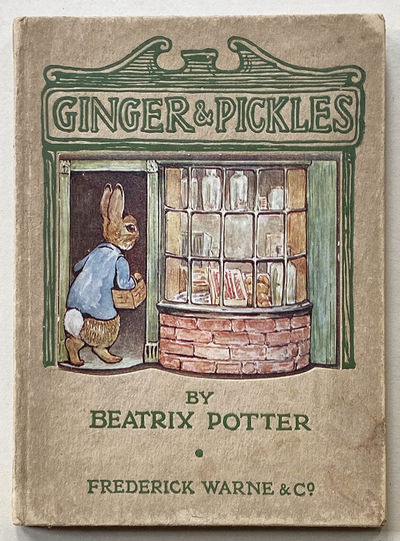 Frontispiece and 9 color illustrations by the author, also text vignettes.

The third of Potter's books to be printed in large format, Ginger & Pickles was worked up from an original manuscript given to Louie Warne, Harold Warne's daughter, as a Christmas gift in 1908. The story was based on a village shop in Sawrey owned by John Taylor when Potter bought Hill Top farm, so the book is dedicated to him.
From the personal library of MAURICE SENDAK with his Jennie bookplate pasted verso front free endpaper. Laid in is a Sendak notecard with a design from The Bat-Poet, inscribed "A very special book for very special Lynn -- on her Birthday! With all my love Maurice May (April) '90", the recipient being Lynn Caponera, who began working for the artist in 1972 as caretaker of his Connecticut house and eventually became his care-giver, chief beneficiary, and president of The Maurice Sendak Foundation. Indeed, a very special copy. (Inventory #: VBF02)
$1,250.00 add to cart Available from Battledore
Share this item

Stroud : Catalpa Press , 1999
(click for more details about Beatrix Potter A Bibliographical Check List)
View all from this seller>