SHEN OF THE SEA - CHINESE STORIES FOR CHILDREN 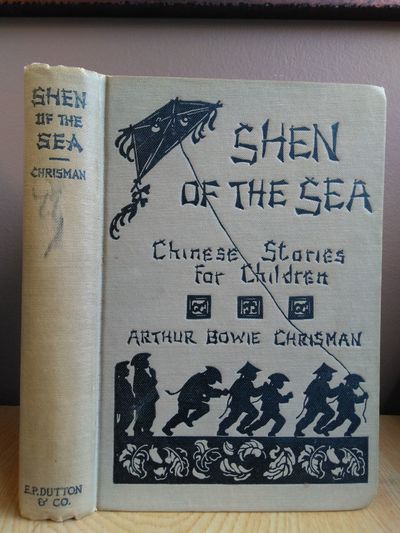 by Chrisman, Arthur Bowie; Hasselriis, Else [illustrator]
New York: E.P. Dutton & Co, 1925. First Edition, First Printing. Hardcover. Octavo, 252 pages; VG; bound in publisher's olive cloth, black lettering to spine; spine cocked; small black smudge to spine; slight foxing to endpapers; presumed first printing, with no further printings listed on copyright page, no date on title page, olive binding, no mention of the Newbery; page 252 uncut; incredibly scarce; shelved case 14. Chrisman won the 1926 Newbery Medal for Shen of the Sea, the 5th Newbery issued. Chrisman's 16 original stories are written in the style of humorous Chinese folk tales. The title story tells of a king who tries to match wits with the demons of the water in order to save his city from a flood. Other tales relate the origin of chopsticks, and an instance when mud pies are revealed to be the origin of fine China.


"Chrisman had never been to China, did not read Chinese, and claimed to be aided by two Chinese speakers, but gave no sources for the stories in his book. Modern readers can only conclude that the charm and dash of the exotic won Chrisman the Newbery medal, for the stories are travesties: Chinese are shown drinking milk, greedy for jam, and eating with a knife and fork. Slangy, staccato spoken Chinese is rendered in convoluted, distant language. Again, the emphasis is on the exotic and fanciful." [Chang, Margaret Scrogin]. 1297012. Shelved Dupont Bookstore. (Inventory #: 1297012)
$1,200.00 add to cart or Buy Direct from
Second Story Books
Share this item

New York : Abbeville Press , 1980
(click for more details about TOM WESSELMANN)
View all from this seller>