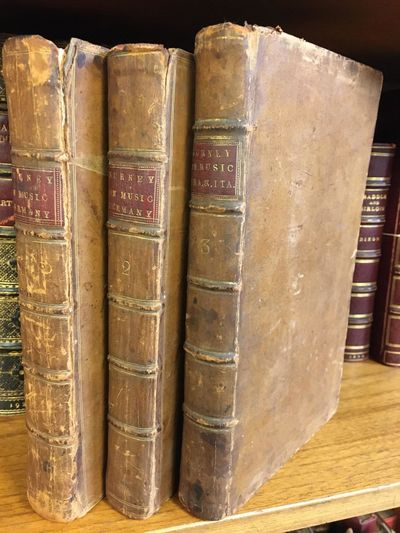 by Burney, Charles
London: T. Becket and Co, 1773/1771. First Editions. Hardcover. Octavos, 3 volumes; VG: bound in contemporary polished calf, paneled spines with morocco labels and gilt titling; some rubbing and wear to boards, including chipping to head and tail of spine; volume 3 is the 1771 first edition of France and Italy, volumes 1 and 2 are the 1773 first editions of Germany, the Netherlands, and United Provinces.;
shelved case 12. Charles Burney FRS (1726-1814) was an English music historian, composer and musician. He left London in June 1770, carrying numerous letters of introduction, and traveled to Paris, Geneva, Turin, Milan, Padua, Venice, Bologna (where he met Wolfgang Amadeus Mozart), Florence, Rome and Naples. The results of his observations were published in a well-received book, The Present State of Music in France and Italy (1771). In July 1772 Burney again visited the continent to do further research, and on his return to London published an account of his tour under the title The Present State of Music in Germany, the Netherlands and United Provinces (1773). [Wikipedia]. 1325592. Shelved Dupont Bookstore. (Inventory #: 1325592)
$800.00 add to cart or Buy Direct from
Second Story Books
Share this item

There's Room For You

London : The Parlimentary Recruiting Committee , 1915
(click for more details about There's Room For You)
View all from this seller>