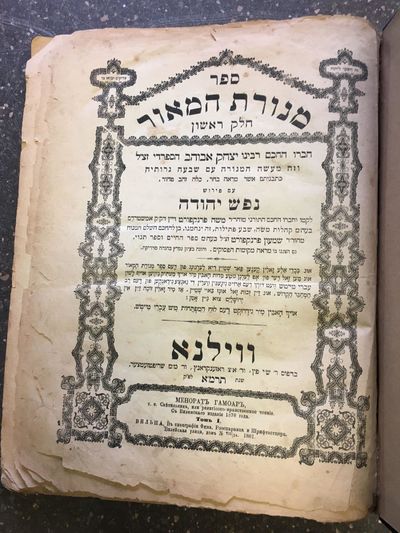 by Aboab, Isaac ben Abraham
Ṿilna [Vilnius]: Defus Sh. Y. Fin, A. Ts. Rosenḳrants, M.M. Shrifṭzeṭtser, 1881. Hardcover. Quarto, 292 pages; VG-; newly rebound in quarter blue leather, blue cloth covered boards, paneled spine with burgundy label and gilt titling; page edges brittle, pages age-toned; upper fore corner of first 96 pages clipped; text in Yiddish; scarce; shelved case 4. Isaac Aboab was an early 14th century Spanish Talmudic scholar and Kabbalist. "The Menorah of Light" is a collection of midrashic sermons. Per the Jewish Encyclopedia: "It has won considerable fame for the author, though in his humility he assures his readers that he composed it chiefly for his own use as a public speaker. But besides this it has contributed probably more than any other medieval book to the popularization of rabbinical lore and to the religious edification and elevation of the masses. It belongs to that class of ethical works which sprang up in the thirteenth century in a time of reaction against the one-sided manner in which the Talmudic studies had been previously pursued.'... It was published with a Spanish translation (Leghorn, 1657), with a Hebrew commentary and a Judæo-German translation by Moses Frankfurter (Amsterdam, 1701), with a modern German translation by Fürstenthal and Behrend (Krotoschin, 1844-46). It was translated also into Yiddish, Wilna, 1880.";. 1331695. Shelved Dupont Bookstore. (Inventory #: 1331695)
$640.00 add to cart or Buy Direct from
Second Story Books
Share this item

Cankor: Van Halen vs. The Clash

2018
(click for more details about Cankor: Van Halen vs. The Clash)

Published by author , 1985
(click for more details about Walking Man Comics No.1-11)
View all from this seller>