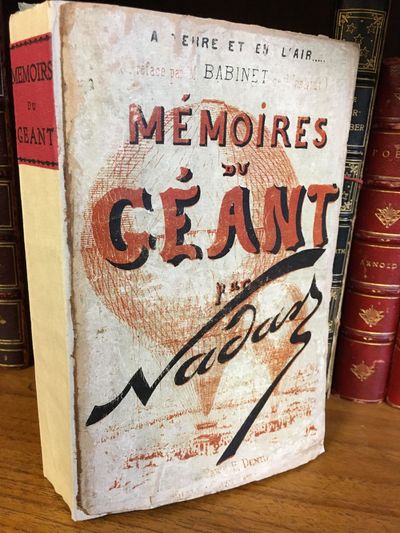 by Nadar [Gaspard-Félix Tournachon]
Paris: E. Dentu, 1864. Octavo, xx, [1], 22-439 pages; VG; original paper wraps backed, new paper spine with red label and black lettering; some rubbing and wear to wraps; Inscribed on half-title by Nadar, dated in 1864; text in French; interior clean; MW consignment; shelved case 10. Gaspard-Félix Tournachon, known by the mononymous pseudonym Nadar, was a French photographer, caricaturist, journalist, novelist, balloonist and proponent of manned flight. In 1858 he became the first person to take aerial photographs. Le Géant (The Giant), inspired Jules Verne's Five Weeks in a Balloon. Nadar was the inspiration for the character of Michael Ardan in Verne's From the Earth to the Moon. [wikipedia];


He launched the world's largest gas balloon, known as Le Géant (Giant). The 196-foot-tall balloon had required more than 300 seamstresses to assemble its 22,000 yards of silk, and at the time was the most elaborate aerial vehicle ever devised. [airspacemag]. 1323640. Shelved Dupont Bookstore. (Inventory #: 1323640)
$400.00 add to cart or Buy Direct from
Second Story Books
Share this item

New York : Liveright, Inc , 1933
(click for more details about MISS LONELYHEARTS)
View all from this seller>