DON TOMAZO, OR THE JUVENILE RAMBLES OF THOMAS DANGERFIELD 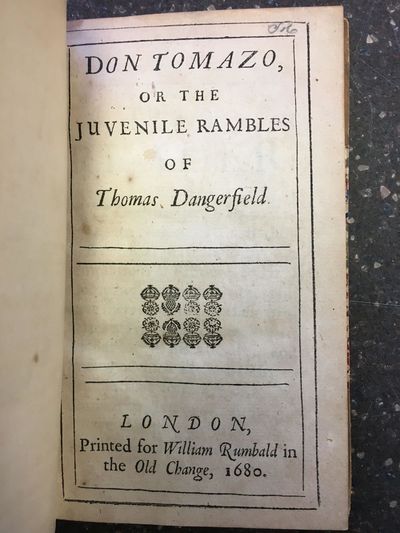 
Thomas Dangerfield (1650-1685) was an English conspirator who became one of the principal informers in the Popish Plot. The Popish Plot, an invented conspiracy by the English priest Titus Oates, alleged that there was a Catholic conspiracy to assassinate Charles II. The anti-Catholic panic occurred between 1678 and 1681 and led to the executions of at least 22 men.;


"In March 1679 a young man of infamous character who went by the name sometimes of Willoughby sometimes of Dangerfield, lay in the debtor's side of Newgate...he was employed to go the round of coffeehouses frequented by old Presbyterians and new Whigs, to pick up what scraps of information against them he could."
[Kenyon, J. P. The Popish Plot, 1903, pages 204/206];


"Tomazo's rambles are told in a genial mock-heroic manner by a witty and inventive narrator. Frustrated by his father's severity, the boy robs him and heads off to Scotland with Jemmy, hoping for riches. The reality turns out to be rather different...Not to be defeated, Tomazo proceeds to out-rogue the English rogue in a career which - mingling Dangerfield's pedestrian crimes with fantastic exploits - takes in forgery, theft, coining, soldiering, whoring, spying, and piracy...Tomazo's luck never deserts him: when captured as a spy in Antwerp he is saved by the intervention of a Catholic priest and when he is arrested in England for coining it is Mrs Cellier who procures his release. Notably, the narrative ends without describing the events of the Popish Plot." [McElligott, Jason. Fear, Exclusion and Revolution, 2006, page 116-117];. 1329459. Shelved Dupont Bookstore. (Inventory #: 1329459)
$6,000.00 add to cart or Buy Direct from
Second Story Books
Share this item
Second Story Books
Offered by

The Hermetic and Alchemical Writings of Paracelsus (2 Volumes)

by Waite, Arthur Edward (edited with a biographical preface, elucidatory notes, a copious Hermetic vocabulary, and index by)

The Qabalah of Aleister Crowley (Including Gematria Liber 777 Sepher Sephiroth)

by Regardie, Israel (introduction by)

New York : Samuel Weiser, Inc , 1975
(click for more details about The Qabalah of Aleister Crowley (Including Gematria Liber 777 Sepher Sephiroth))
View all from this seller>