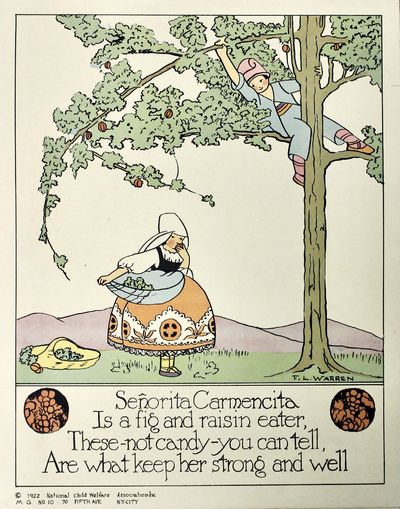 by [ Haviland, Mary S. and Fanny L. Warren ]
New York: National Child Welfare Association, 1921 – 1922 First edition. The National Child Welfare Association published theset posters during the height of the Progressive Movement in America. They illustrate the importance of health eating and exercise for children, based on recent advances in health science and conveyed in familiar nursery rhymes, and would have been used as teaching tools. Printed card stock richly illustrated in color. . Five posters, 11 in. by 16 in. . Includes posters three, four, six, ten, and twelve of a larger set, though we were unable to determine how many posters were originally included in the series. With lovely half-page color illustrations by Fanny L. Warren and nursery rhymes by Mary S. Haviland. A very good, bright example of these rare posters. The Progressive Movement focused on federal welfare programs and was responsible for mother's pension laws, forerunners of the Social Security Act; and the founding of the National Child Labor Committee. The Children's Bureau, a federal agency that focuses exclusively on children's welfare, was also a result of the movement; its first chief, Julia Lathrop (1858 – 1932), was the first woman selected by a President to head a federal agency (Children's Bureau website).Mary S. Haviland and Fanny L. Warren frequently collaborated on materials for the National Child Welfare Association. The poster sets Healthy Habits (1923), Children from Many Lands (1923), and In Hearts too Young for Enmity (1923) all featured illustrations by Warren and verse by Haviland. The latter two sets were created as tools to teach children racial and cultural acceptance as immigrant populations continued to increase in the United States. Haviland also wrote manuals on health and childhood development like Modern Physiology, Hygiene and Health (1921) and A Study of Babyhood (1927). Warren also illustrated Little Neighbors of Many Lands (1926), a book of paper dolls themed around accepting people of other cultures. (Inventory #: 16851)
$650.00 add to cart or Buy Direct from
Michael R. Thompson Rare Books
Share this item
Michael R. Thompson Rare Books
Offered by

London: : Smith, Elder and Co., , 1862
(click for more details about Intellectual Education, and Its Influence on the Character and Happiness of Women)

Oakland, California: April 1938
(click for more details about A New Experience [Manuscript fiction])
View all from this seller>