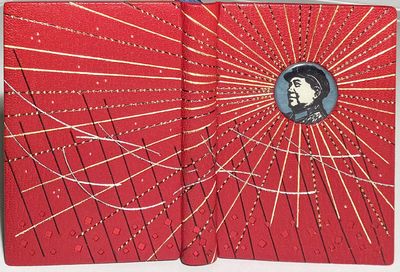 first edition Full red morocco elaborately detailed with both blind and gilt tooling, a celluloid portrait of Mao inserted into the front cove

Portrait of Chairman Mao as frontispiece, although it immediately follows the printed title-page.

Small 8vo, Full red morocco elaborately detailed with both blind and gilt tooling, a celluloid portrait of Mao inserted into the front cove; Fine in designer binding, the interior with a few minor smudges from earlier use.

First edition, earliest printing of the official "Little Red Book" being selected quotations from various writings and speeches made by Chairman Mao through 1963. It was created as a book of inspirational reading for soldiers of the People's Liberation Army to help them become more familiar with Mao's teachings.
This earliest version is identified by a printing error which transposes two Chinese characters at the bottom of page 82 and top of page 83, the text printed as "li men wo yong" instead of the correct "li yong wo men". Some copies retain a small printed erratum slip which rarely survives; in this copy the text has neatly been crossed through and corrected in ink above or below the mistake. The printing error in the Lin Biao endorsement still occurs, as it should in all true copies of the first edition, here printed in brown ink (other copies are noted in black ink, always found with the corrected text at pages 82/83.
In this edition there are only 30 chapters ending at page 250; a second edition (March 1965) enlarged the text with two added chapters (now ending at page 260), while the third edition (August 1965) added a 33rd chapter and brought the text to 270pp. All subsequent printings and all translations are based upon the 3rd edition rendering of Mao's text. UNIQUE EXAMPLE in a modern design binding created by a well-respected Taiwanese binder now resident in Canada. (Inventory #: VBF50)
$9,500.00 add to cart Available from Battledore
Share this item

The MIRROR; or a Looking-Glass for Young People of both sexes; to make them wise, good and happy. Consisting of a Choice Collection of Fairy Tales by Mother Goose.

Newcastle upon Tyne, : T. Saint for W. Charnley; and M Vesey, J Whitfield, , 1788.
(click for more details about The MIRROR; or a Looking-Glass for Young People of both sexes; to make them wise, good and happy. Consisting of a Choice Collection of Fairy Tales by Mother Goose.)

[London:] : [George Bickham the Younger] sold in May's Buildings, Covent Garden, N. at the Glob[e] in Pater Noster Row, , July 19, 1744
(click for more details about The SNUFF BOX PORTRAY'D.)
View all from this seller>