Description of Dunlap's Painting of Christ Rejected by the High Priest, Elders and People When Brought by Pilate from the Judgment Hall to the Pavement 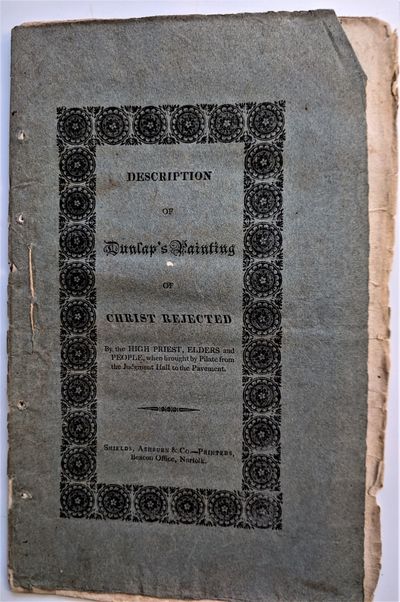 by (Dunlap, William)
(Norfolk, Virginia): Shields, Asburn & Co., Printers, 1822. 8vo. 230 x 150 mm., [9 ¼ x 5 ¾ inches].  14 pp. Original blue paper printed wraps, stitched as issued.  Decorated with an attractive ornamental border.  First edition.  William Dunlap completed this painting at Norfolk, Va., in March 1822. The artist exhibited it at Norfolk during the spring months, at Philadelphia in June, and at Boston and Portland in July. Under the care of an agent the painting was subsequently exhibited in cities as far west as Urbana, Illinois.  "Christ Rejected  was finished in March, 1822, and placed on exhibition .  Dunlap printed a pamphlet containing Benjamin West's painting of the same title.  He expressed his obligation to that painter's treatment of the subject, but asserted that the composition, coloring, and principal figures were entirely his own"  (BAL).  See West below for two pamphlets describing his painting of the subject.  The rear wrapper of this copy has a wonderful advertisement for the printer, Shields, Ashburn & Co. BAL 5021. Shoemaker 1056 (4 copies) assigning a tentative date of 1820.  OCLC cites three additional copies. (Inventory #: 681)
$750.00 add to cart Available from
De Simone Company
Share this item
De Simone Company, Booksellers
Offered by