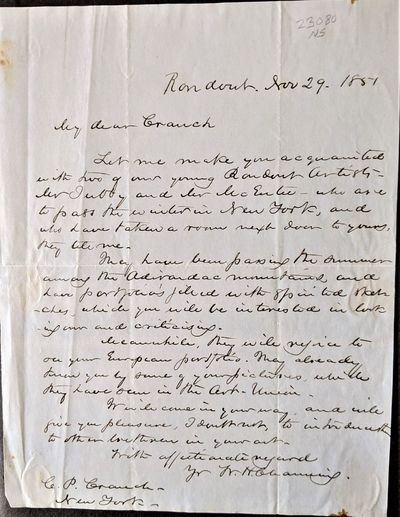 by Channing, William Henry
Rondout, [New York], 1851. 4to. 250 x 195 mm., [9 ¾ x 7 ¾ inches].  1 p.  20 lines.  Manuscript in ink on blue paper.  Previous folds, hinged on verso, a few brown spots, bright & legible. Autograph letter of introduction for two burgeoning artists to Christopher Pearse Cranch requesting that he examine the portfolios of the two artists. "Let me make you acquainted with two of our young Rondout artists-Mr. Inboy (?) and Mr. McEntee--who are to pass the winter in New York, and who have taken a room next door to yours."  Channing goes on to say that they have spent the summer in the Adirondacks and have "portfolios filled with spirited sketches" for Cranch to criticize. It also mentions Cranch's pictures in the Art Union.  Signed, "With affectionate regard yr W.H. Channing". Christopher Pearse Cranch (1813-1892) attended the Harvard Divinity School , was a Unitarian minister, a Transcendentalist, poet, and  a landscape painter in the manner of the Hudson River School.  He studied in Europe, was elected to the National Academy of Fine Arts and his work is represented in the Boston Museum of Fine Arts. Jervis McEntee (1828-1891), also a Hudson River School painter, was a diehard member of the National Academy of Design's old guard and fiercely opposed to the influences of modern and avant-garde painting in Europe. McEntee studied with Frederic Edwin Church and was among the leading artists in New York in the late nineteenth century. The writer, William Henry Channing, (1810-1884) a reform minded minister also of the Harvard Divinity School, was connected with Brook Farm. Rondout, New York is the port of the town of Kingston on the Hudson that was settled by the Dutch in the seventeenth century. It was a favored site for painters, especially those of the Hudson River School, whose Romantic approach to depicting the Hudson River Valley, the Catskills, Berkshire, and White Mountains became one of America's first schools of painting. See Mantle Fielding's Dictionary of American Painters for biographical references. (Inventory #: 683)
$200.00 add to cart Available from
De Simone Company
Share this item
De Simone Company, Booksellers
Offered by