[Album of newspaper clippings, photographs, and ephemera related to the Kent Motor Club] 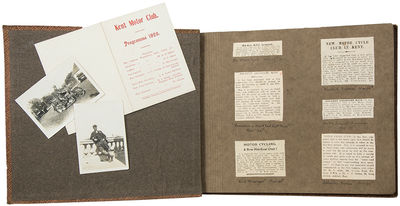 by KENT MOTOR CLUB
Np, 1927. (8 x 9 3/4 inches). Approx. 24 pages of newspaper clippings, 1 folding, pasted into album. 2 loose photographs and a program card. A scrapbook album chronicling the founding, trials, and successes of a motorcycle club in the early years of the sport. This scrapbook shows the evolution of the Kent Motor Club, formed in the county of Kent, England, from its initial beginnings around 1924 and the trials and championships it participated in up to 1927. The articles include details about the club's opening runs and trials including the names of organizers, competitors, and locations. Two of the clippings are letters to the editor which discuss a rivalry between the Kent Motor Club and the Ashford Motor Club, which was founded in 1922. Each newspaper clipping has a hand-written caption underneath with the name of the newspaper and the date of the article. According to one of the newspaper articles, the Kent Motor Club was founded in December of 1925 with a membership of 72 riders. The founding board included the president, Sir Charles Wakefield; the chairman, F. Hayward; the captain F. E. Mockford; vice-captain S. F. Finch; honorary secretary C. F. Stokes; honorary treasurer W. Oliver; honorary trial secretary H. L. Gibbs; honorary assistant trial and publicity secretary L. Hildyard; and several others. Sir Charles Wakefield was an entrepreneur who patented the automatic lubricator for steam engines and, in 1899, founded the Wakefield Oil Company, which came to be known as Castrol, after the ingredient of castor oil used in their lubricant. Castrol was used in the engines of motor cars, airplanes, and motorcycles and today remains a prominent British oil company. Wakefield was also the mayor of London from 1915-1916 and was further known for his philanthrophy, which the Kent Motor Club may have been a recipient of. One article describes the Club's first annual dinner, whose guests included vice president R.C. Rootes, likely the motoring pioneer Reginald Claud Rootes (co-founder of the British car company, Rootes Group), and speaker F. E. Mockford, a well-known figure in the motorcycling world at the time. In 1926, Mockford and his business partner, Cecil Smith, formed a company called London Motor Sports Ltd. and in 1927, they brought motorcycle racing to one of motorsport's oldest venues, the Crystal Palace circuit in south London. The sport proved to be quite popular with the spectating public, who came to the stadium in the tens of thousands to watch competitors on bikes with no brakes fling their way around the track's sharp corners at breakneck speeds. Overall, the album paints a lively picture of the exciting early years of motorcycle speedway racing in Kent, a county home to several motor pioneers. (Inventory #: 36779)
$350.00 add to cart or Buy Direct from
Donald A. Heald Rare Books
Share this item
Donald A. Heald Rare Books
Offered by

Account of an Expedition from Pittsburgh to the Rocky Mountains, performed in the years 1819, 1820 ... under the command of Maj. S.H. Long, of the U.S. Top. Engineers. Compiled from the notes of Major Long, Mr. T. Say, and other gentlemen of the party, by Edwin Thomas, botanist and geologist to the expedition

London : Longman, Hurst, Rees, Orme & Brown , 1823
(click for more details about Account of an Expedition from Pittsburgh to the Rocky Mountains, performed in the years 1819, 1820 ... under the command of Maj. S.H. Long, of the U.S. Top. Engineers. Compiled from the notes of Major Long, Mr. T. Say, and other gentlemen of the party, by Edwin Thomas, botanist and geologist to the expedition)

The Works of the Right Honourable Joseph Addison. With Notes by Richard Hurd, D. D.

London : T. Cadell and W. Davies , 1811
(click for more details about The Works of the Right Honourable Joseph Addison. With Notes by Richard Hurd, D. D.)
View all from this seller>