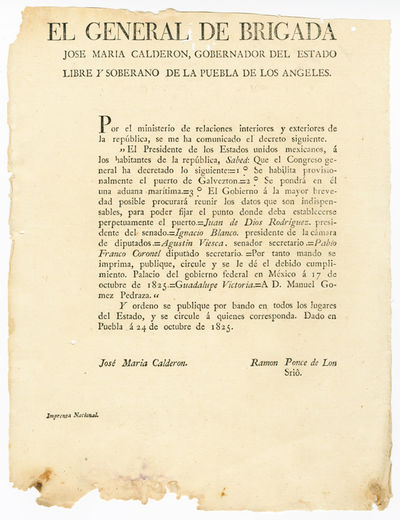 by [Texas]: Victoria, Guadalupe
Puebla, 1825. Broadside, 11 1/4 x 8 3/4 inches. Minor worming near top edge, just touching one letter of the caption title. Minor staining, bottom edge and corner chipped. Still, very good. An apparently-unrecorded provincial printing of a Mexican colonial decree establishing Galveston, provisionally, as an official port. Stephen F. Austin had lobbied the Mexican government to establish Galveston as a port city in Coahuila and Texas, given that any goods entering Texas had to be imported into Mexico first and then carried overland into Texas. The present law, enacted in 1825, made Galveston an official Mexican port, though there would not be a customs house built there for another five years. In the interim, in fact the next year, Austin himself reneged on his support of Galveston as a port, instead calling for a port to be established at the mouth of the Brazos River. The Mexican government ignored Austin's arguments, and built a customs house at Galveston in 1830. "This action of the Federal Congress was perhaps brought about by a communication of Stephen F. Austin to the Congress of Coahuila and Texas dated February 4, 1825...strongly advocating the opening of Galveston as a port free of duties....It states very briefly in sections one and two that Galveston is provisionally established as a port and that a custom house will be located there. Section Three states that the government will as soon as possible assemble the necessary data for fixing the permanent location of the port. In 1823, the Federal Congress had relieved from duties all imports into Texas for the next seven years" - Streeter. Streeter locates three copies of the Mexico City edition of this decree, at Yale, the University of Texas, and the Rosenberg Library in Galveston. Streeter and OCLC add two copies of an October 19 Mexico City printing at the University of California and in the Bernardo Mendel Collection at Indiana University. Neither Streeter nor OCLC record any copies of this Puebla printing. STREETER TEXAS 705 (ref). LILLY TEXANA 15 (ref). EBERSTADT TEXAS 334 (ref). LATHROP HARPER 12:24 (ref). OCLC 47206736 (ref). (Inventory #: WRCAM55784)
$3,000.00 add to cart or Buy Direct from
William Reese Co. - Americana
Share this item