The clockmaker; or, the sayings and doings of Sam Slick, of Slickville. First [-second, -third] series 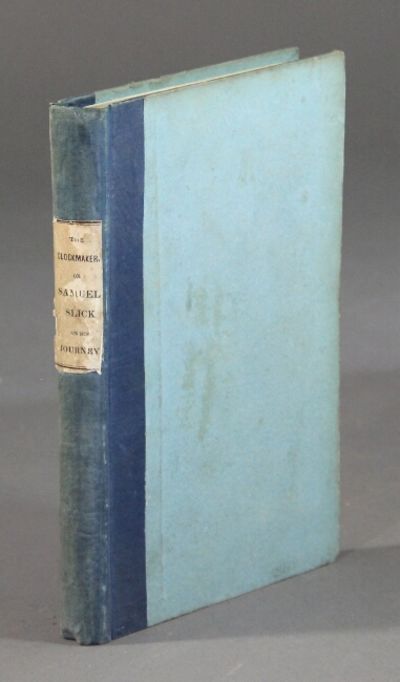 by [Haliburton, Thomas C.]
New York: William H. Colyer, 104 Beekman Street, 1840. First and second series in one volume, third series in a separate volume; 12mo, pp. [5], 14-114; [5], 120-240; iv, [1], 14-215, [1]; both volumes in original cloth-backed boards, printed paper labels on spines, the first with brown cloth over pink boards, the second with blue cloth over blue boards; the second volume a bit skewed, both volumes slightly rubbed, but generally very good and sound. The first edition of the first series was first published in Canada in 1836; the second and third series were first published in London by Richard Bentley in 1838 and 1840 respectively. These American editions are surprisingly uncommon. The first American edition of the first series was published in 1837, and the second and third series the followed in 1838 and 1840. "These very clever sketches of Yankee and colonial life are, of course, somewhat overdrawn. They were immensely and deservedly popular, for under the guise of satire there was a rich vein of sound, practical common sense" (Sabin). Haliburton (1796-1865) was a Nova Scotian politician, judge, and most famously today, an author. He was one of the first Canadians to make a name for himself internationally as a writer of fiction and satire. Sabin 29684. (Inventory #: 57465)
$402.50 add to cart or Buy Direct from
Rulon-Miller Books
Share this item

Madison, Lake County, Ohio 1884
(click for more details about Diary of a farmer)

Theatrical management in the west and south for thirty years. Interspersed with anecdotal sketches: autobiographically given

New York : Harper & Brothers, publishers, Franklin Square , 1868
(click for more details about Theatrical management in the west and south for thirty years. Interspersed with anecdotal sketches: autobiographically given)
View all from this seller>