Bolshevism; promises and reality. An appraisal of the results of the Marxist dictatorship over Russia 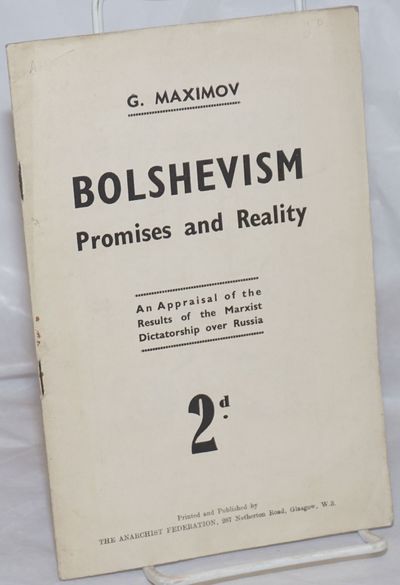 by Maximov, G[regorii Petrovich; also spelled Gregory Maximoff]
Glasgow, Scotland: The Anarchist Federation (Glasgow Group), 1940. Pamphlet. 23p., staplebound pamphlet, 5.5x8.25 inches, wraps worn and soiled with a few small rust stains, staples rusted else very good condition. Later reprinting of a pamphlet first printed in English in 1935 by the Free Society Group of Chicago. Brief forword by The Anarchist Federation outlines the offenses of the Soviet Union since 1935, including the breakup of collectives in anarchist Spain and the German-Soviet non-agression pact. After leaving the Soviet Union for Germany in 1922, the author continued to be a major figure in the international anarcho-syndicalist movement. He came to the United States in 1925 and settled in Chicago. (Inventory #: 256761)
$35.00 add to cart or Buy Direct from Bolerium Books
Share this item