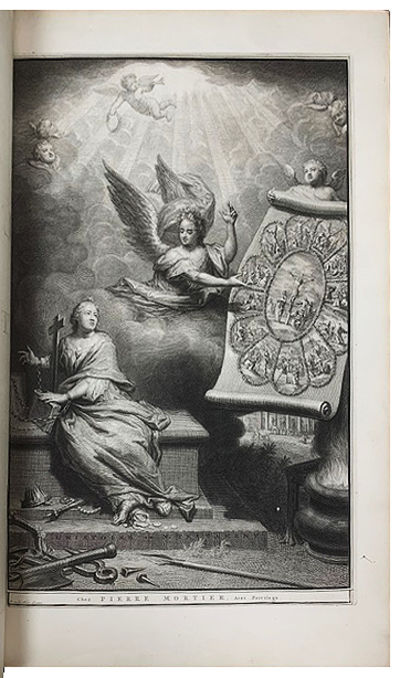 First edition, first issue and a magnificent copy of this sumptuously illustrated print Bible, commonly known as Mortier's Large Bible, in which the obsessive tendency of Golden Age Dutch culture to illustrate overwhelms any Calvinist scruple over the sinfulness or inadequacy of pictures in relation to Holy Writ, and in which the preciousness of the contents are embellished yet further by a grand and expensive morocco binding. In such a copy, rare. This copy contains the famous apocalypse plate in the second volume before a printing mishap disfigured it with some errant nails. Such copies, known as avant les clous are rare, and are considered a sign of first issue.


The work contains an engraved plate showing (generally) two subjects for virtually every page of text (c. 428 illustrations), with a Dutch and French caption above each scene. (French and Dutch language editions of the text were issued the same year.) The illustrators included two of three most admired contemporary engravers, Jan Luyken, who drew and engraved all of his designs, and Bernard Picart; the third, de Hooghe, was at work on another Bible, and comparison of two monumental illustrated Bibles in progress at more or less the same time would be an interesting research project, given the close connection between scripture and contemporary politics (see Simon Schama, Patriotic Scripture in Embarassment of Riches, p. 95 ff.) The foreword and text for each plate was written by David Martin, a French Protestant theologian resident in Holland, with his French text translated by W. Sewel. The work was issued simultaneously in French and Dutch with the same plates, differing only in the preliminary matter and in whether the final plate is defective or not.