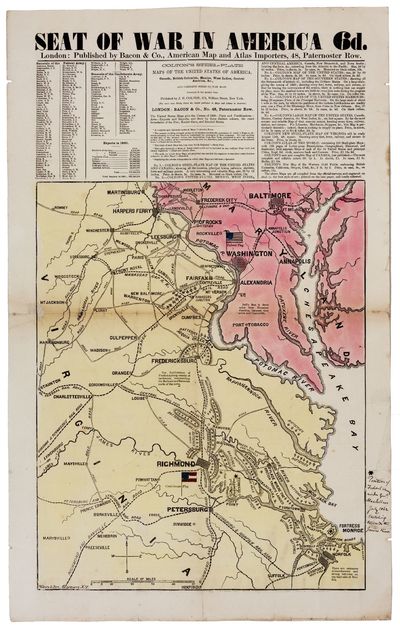 by [AMERICAN CIVIL WAR].
Wood-engraved map with contemporary hand coloring, engraved by Waters & Son, New York, with publisher's advertisement above map, near contemporary marginal annotation to lower right margin which reads 'Position of Federal Army under General Maclellan [sic] July 1862 stretching towards the James River'; two closed tears in image carefully restored and barely visible, a few other very minor repairs; a little fraying and some light discoloration at an old fold. 55.5 x 32.5 cms. Altogether a very nice example, attractive.
An attractive, contemporary hand-colored, very rare (this edition not in the Library of Congress) separately issued US Civil War map focusing on the area of Virginia and Maryland where the earliest battles were fought between the Union and Confederate armies and among the earliest broadside maps to specifically treat the battleground states in the growing conflict. Signaling its impartiality by prominently displaying both the Confederate and Federal flags, the map represents the most recent news of the conflict in Virginia and Maryland from a British perspective, as it was published in England and intended for a British audience. Britain was officially neutral in the American contest, but had ardent sympathizers on both sides. Printed from a woodblock engraved by the New York firm Waters & Son, the edition offered here is undated but must have appeared very early on, around the time of the Battle of Bull Run, the first important battle of the Civil War in July 1861. "Bull Run" the mapmaker states on the spot on the map where the actual battle was fought "is three miles from Manassas Junction between that point and Centreville." Water's engraving or its likeness would appear a number of times over the next several years with each edition or version bringing to the public's attention the most recent, and sometimes climactic, events of the war. Both American and British newspapers would report these events as they occurred and sometimes used an updated version of the Waters' woodblock as a full-page illustration. It is, however, particularly rare to find this map as a separately issued broadside, printed on special paper, such as the present contemporary hand colored example offered here.

At the top of the sheet is text, listing in separate columns the names of the Union and Confederate generals and a separate column for US exports in 1860. Notable is the enormous figure for US cotton which was exported, primarily to England before the war, nearly $192,000 of $373,000 of the total exports for the US economy – a statistic which must have reminded the British reader of the great cost the developing war would have on their textile industry. Much of the text is promotional. Bacon was, perhaps, the most important purveyor of American maps and atlases in England at the time and the representative for J.H. Colton, one of the leading map publishers in the United States whose cartographic publications, available from Bacon & Co. in England, are prominently described and priced in the text.
A SHORT HISTORY OF THE MAP TO 1863The earliest dated edition of Water's engraving which we were able to find appeared in the morning edition of the New York Herald on June 17, 1861 (Stevenson 451.3). Published a few weeks before the Battle of Bull Run, specifically mentioned on our map, but not in this newspaper version, it notes in anticipation the number of troops amassing at Manassas Junction and on their way by train from the south. This edition was issued twice more, on July 27 and September 11, the latter with no reference to the troops at Manassas. Another edition, also entitled "Map of the Seat of War…." (located at the BPL) nearly identical to ours appeared in the London American Newspaper [1861]. This version has an additional reference to the Battle of Bull Run below the map. All 3 of these maps, found in Stevenson's Civil War Maps, were published in newspapers. We find no reference to a separately issued broadside edition. Approximately a year later, in an edition dated July 1862 (Stevenson 452), the map once again appears this time updated to include Mc Clellan's position on the Peninsula which is shaded red as noted in several printed lines in the lower right corner. This latter is a handcolored broadside. The Library of Congress also has a similar example to ours, though significantly modified, published 2 years later in 1863, around the time of the invasion of Pennsylvania, which replaces the historical and promotional text at the top of our sheet by extending the map north to include part of southern Pennsylvania and a list of Bacon's Shilling maps in the lower left hand corner (Stevenson 476.5). This too is a colored broadside. In summary, it appears that major battles or impending significant events, such as Bull Run noted on ours and Mc Clellan's battle at Manassas may have been treated in a hand colored broadside publication. With the war continuing elsewhere, the Waters' woodcut focusing on Virginia and Maryland became irrelevant to ongoing cartographic documentation of the war as battles moved from one locale to another in different parts of the country.
A handwritten contemporary annotation in the lower margin references a star added to the map by hand that updates it, indicating the "Position of Federal Army under General Maclellan in July 1862 stretching towards the James River." Four minor punctures in the blank margins suggest that this copy was affixed to a wall at some point in its earlier history. A rare survival.
*See Stephenson, Richard. Civil War Maps An Annotated List of Maps and Atlases in the Library of Congress. (Inventory #: 6001)
$4,500.00 add to cart Available from Martayan Lan
Share this item
Martayan Lan, Inc.
Offered by