THE ANSWER AND PLEAS OF SAMUEL CHASE, one of the associate justices of the Supreme Court of the United States, to the articles of impeachment, exhibited against him in the Senate, by the House of Representatives of the United States, in support of their impeachment against him, for high crimes and misdemeanors, supposed to have been by him committed. Printed by order of the Senate 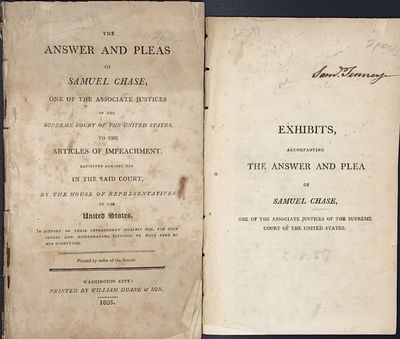 by [Chase, Samuel]
Washington City: Printed by William Duane & Son, 1805. Disbound pamphlet. 21 cm. 84pp. Accompanied by EXHIBITS, ACCOMPANYING THE ANSWER AND PLEA OF SAMUEL CHASE, one of the Associate Justices of the Supreme Court. [Washington City: 1805] 20 cm. 54 pp. Disbound pamphlet, lacking title page. Signature of Samuel Tenney, Federalist Congressman from New Hampshire, 1800-1807, and Revolutionary War surgeon, on half-title. These two pamphlets are seldom found together. Chase was a signer of the Declaration of Independence. The impeachment partly resulted from his high-handed conduct in 1800 at the Fries trial for treason. After other incidents, in 1803, Jefferson recommended impeachment. "The trial was long, bitter, sensational. Republicans [i.e. Jeffersonians] defected in enough numbers so that Chase was acquitted, by the slimmest of margins. John Marshall and his court were henceforth 'secure.' It was the end of what Alfred Beveridge called 'one of the few really great crises in American history." --Friedman, History of American Law. (Inventory #: 65299)
$750.00 add to cart or Buy Direct from
Bartleby's Books
Share this item