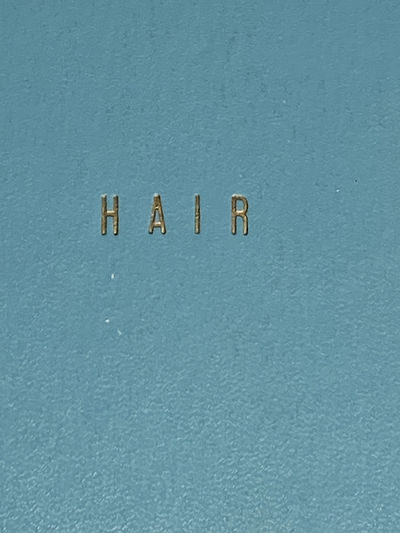 by (BROADWAY MUSICAL)
HAIR. The American Tribal Love Rock Musical by Gerome Ragni and James Rado. Original typescript created prior to off-Broadway production by Studio Duplicating Service Inc (446 West 44th Street, NYC), title gilt-stamped and recessed on upper cover, title-page "copyright 1966" listing contact details for Authors and Producer, collates [i], 1-45, 2-27, bound in teal cartridge wrappers with double-rivets, small tears along outer wrapper edges but no loss.
An icon in establishing the hippie counterculture and sexual revolution of the late 1960s with several of its songs becoming anthems of the anti-Vietnam War peace movement. It debuted off-Broadway at Joseph Papp's Public Theater (October 17, 1967) for six weeks, then at the Cheetah discotheque (53rd and Broadway) for 45 performances prior to 1750 performances (four years) at The Biltmore Theatre.
Provenance: signed in ink "Linda Compton" preceded by "#44", original cast member of "The Tribe" listed at ibdb.com as from opening April 29, 1968 thru July 1, 1972, featured singer in "Electric Blues", "Easy to Be Hard" and "Black Boys", recorded 1967 Off-Broadway production; afterwards the estate of Monique van Vooren, celebrated actress and early investor in "Hair" who introduced her protégé Hiram Keller to the cast (later starred in Fellini's "Satyricon" 1970). Also included is a 1968 LP of the original Broadway cast in its correct vintage pictorial cardboard sleeve. (Inventory #: BB076)
$850.00 add to cart Available from Battledore
Share this item

The MIRROR; or a Looking-Glass for Young People of both sexes; to make them wise, good and happy. Consisting of a Choice Collection of Fairy Tales by Mother Goose.

Newcastle upon Tyne, : T. Saint for W. Charnley; and M Vesey, J Whitfield, , 1788.
(click for more details about The MIRROR; or a Looking-Glass for Young People of both sexes; to make them wise, good and happy. Consisting of a Choice Collection of Fairy Tales by Mother Goose.)

[London:] : [George Bickham the Younger] sold in May's Buildings, Covent Garden, N. at the Glob[e] in Pater Noster Row, , July 19, 1744
(click for more details about The SNUFF BOX PORTRAY'D.)
View all from this seller>