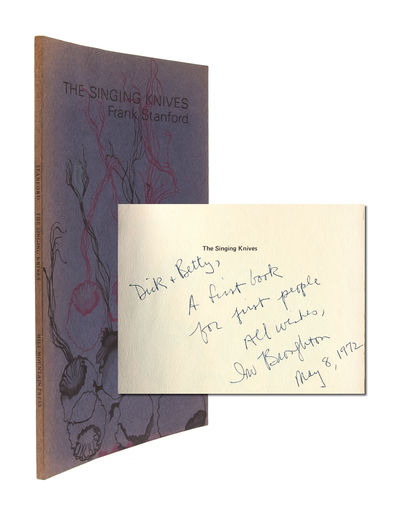 The noted experimental poet's first book, involving strange tall tales and recurring characters, rivers, and a constant focus on death. Broughton, publisher of Mill Mountain Press, met Stanford in June, 1970, at the Hollins Conference on Creative Writing and Cinema, where he read Stanford's work and agreed to publish his first book. The two spent much of 1972 traveling through the South and New England, where together they interviewed and filmed Malcolm Cowley, John Crowe Ransom, and Richard Eberhart, who offered them his cottage on Cape Rosier. The present copy was inscribed during this brief period, where the group spent time filming and touring the coast together on Eberhart's yacht. An important debut, and a tremendous association. Near Fine. (Inventory #: 4000)
$3,500.00 add to cart or Buy Direct from
Whitmore Rare Books
Share this item