An Accurate Map of Rhode Island, Part of Connecticut and Massachusets Shewing Admiral Arbuthnot's Station in Blocking up Admiral Ternay 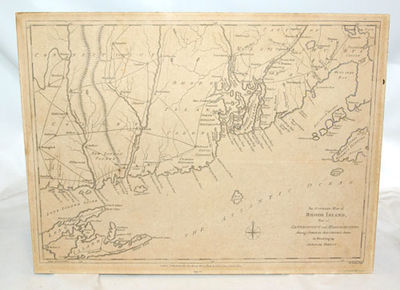 by Lodge, Jno [John]
London: J. Bew, 1780. First Edition. Very good+ and uniformly tanned mounted on a thin, cardboard stock measuring 11 11/16 by 15 3/4 inches (edge to edge). This map shows the eastern half of Connecticut, the Rhode Island coast as far north as many miles north of Providence, the southeastern portion of Massachusetts including Buzzards Bay and western Marthas Vinebyard and the eastern end of Long Island. According to Thompson's Maps of Connecticut Before The Year 1800, the latitude coordinates are correct, but the longitude coordinate is in error as it would place Connecticut in the mid-Atlantic, an error which appears to come from an earlier British map of the same yea.r This is a map taken from the London publication of The Political Magazine issue of November 30, 1780. Many of the place names, towns and cities are in error from current names. This map illustrates the area of eastern Long Island Sound and Block Island Sound which was blockaded by British Admiral Mariot Arbuthnot to contain part of the French Fleet in Newport which was under the command of Admiral Louis d'Arsac de Ternay. (Thompson, #30 p.43) (Inventory #: TB31619)
$350.00 add to cart Available from
Town's End Books
Share this item

New York : Van Nostrand and Dwight , 1836
(click for more details about A Visit To Texas Being The Journal Of A Traveller Through Those Parts Most Interesting To American Settlers)

River Notes The Dance of Herons

Kansas City : Andrews & McMeel , (1979)
(click for more details about River Notes The Dance of Herons)
View all from this seller>