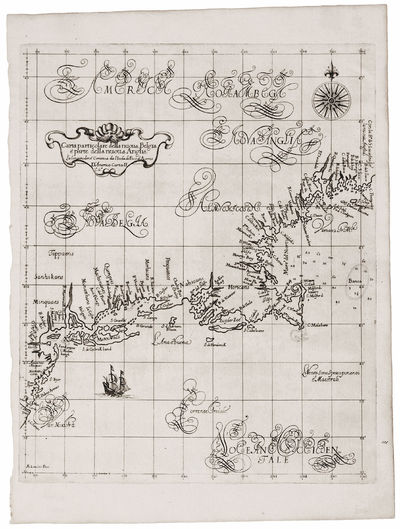 An exquisitely engraved rarity, the earliest printed chart of the Northeast that was published in the first sea atlas produced by an Englishman (though published in Florence), the Arcano del Mare (Secrets of the Sea). One of the jewels of early cartography, the atlas's elegant Florentine engraving formed a link between hand-drawn portolan charts, which preceded it, and the technically more sophisticated works of the 17th century. Evidence of the latter was that Dudley's Arcano was the first to employ the Mercator Projection throughout, as well "the earliest to indicate the prevailing winds, ocean currents and magnetic variations of the compass" (Burden). Clearly, Dudley, who in 1594 headed an expedition to the Orinoco and Guiana, was more sensitive to the needs of the working sailor than many of his fellow mapmakers at the time.
This chart was the earliest printed map we are aware of to accurately position Boston. However, in the New York area, Dudley's chart shows the inaccuracies characteristic of the earliest mapping of the area: Manhattan in a triangular shape and Long Island as an archipelago. An interesting feature on the chart not found on Dutch maps of the period is the use of "R:Hudson" for the river. The Dutch avoided this appellation fearing it would support English claims to the area. (Although Hudson was English, he in fact sailed under Dutch sponsorship). Burden points out that though the map largely depended on Dutch sources, Dudley also incorporated some more up-to-date English information as well.
Dudley was one of the most colorful figures among early mapmakers. He was the illegitimate son of Robert Dudley, Earl of Leicester, who for a time was one of the favorites of Elizabeth I. Although he received the education of the offspring of nobility and was knighted by Elizabeth for his siege of Cadiz, he eventually fell out of favor of the Queen. Thus, not able to secure a title or position commensurate with his abilities in England, Dudley, along with his cousin Elizabeth Southwell disguised as a page, made his way to Florence, where he became a valued courtier to the Medicis, supervising several major engineering projects. This is the second of two states of the chart, the first having appeared in 1647; both states are rare.
*Burden 278. (Inventory #: 6017)
$38,500.00 add to cart Available from Martayan Lan
Share this item
Martayan Lan, Inc.
Offered by