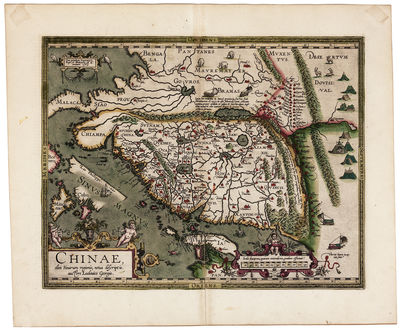 A brilliant example in rich original hand color of the rare (and only) English language edition of the earliest printed, folio-size western map specifically of China and "the first to show the Great Wall"(Nebenzahl). "This map remained the standard type for the interior of China for over sixty years" (Tooley). Although 2 pocket-sized English language editions of an abbreviated version of Ortelius' Theatrum entitled Epitome were published previously in 1601 and 1603, with brief texts in English, the English text in the present edition runs to 2 large folio pages printed on the back of the map, giving an extensive description of China drawn from recent publications of observations by European travelers to the area, particularly Jesuits. With its three lushly designed cartouches and many illustrations of indigenous shelters, modes of transportation (i.e. the famous wind wagons) and animals, this is one of Ortelius's richest engravings and among his rarest.
*Nebenzahl, Mapping the Silk Road and Beyond 4.6; van der Krogt 8410:31:051; Tooley, Maps and Mapmakers, p. 106, pl. 78 (p. 108); Walter, Japan: A Cartographic Vision 11F, p. 186. (Inventory #: 6020)
$11,500.00 add to cart Available from Martayan Lan
Share this item
Martayan Lan, Inc.
Offered by