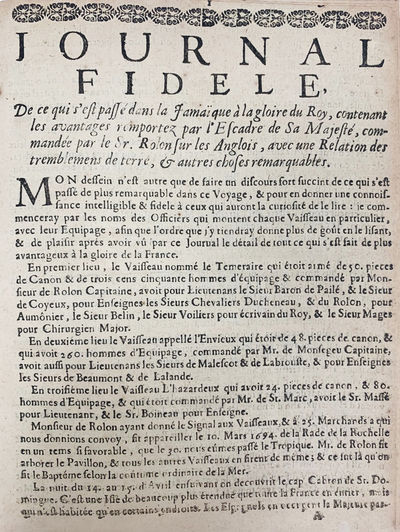 by [JAMAICA/ SAINT-DOMINGUE]
4to. (227 x 170 mm.) 8 pp. Bound in marbled paper over boards. Margins short, cropping page numbers on 2 leaves and just touching but not obscuring the top of some letters of text. Generally very good.

Very rare, with one recorded copy (in Bordeaux), of a detailed and lively account of this French expedition against Jamaica during the Nine Years War, comprising a string of brutal attacks over the summer of 1694 led by Jean-Baptiste Du Casse. Appointed Governor of Saint-Domingue in 1691, Du Casse had earlier in his career been involved with the slave-trading Compagnie du Senegal and had served throughout the Atlantic world in various capacities including as admiral and privateer. Very familiar with the Caribbean and the ways of the filibusterers and buccaneers operating there, he was the best candidate for the difficult job of rallying competing interests to align with those of la France d'outre-mer at a time when funding from France was scarce with Louis XIV distracted by the War of the League of Augsburg closer to home.
In brief, 3 French warships accompanied by numerous transport ships under the command of Captain Rollon, were sent to Saint Dominique to provide support to the colonists against the Spanish in neighboring Hispaniola. Soon after their arrival they were reassigned by Du Casse to cruise off Jamaica in early April, 1694 where they eventually landed at Port Morant on the eastern coast of the island. Over a period of six to seven weeks they ravaged plantations, destroyed over 50 sugar-works and kidnapped hundreds of slaves along with killing and torturing numerous English colonists. Soon to follow, Du Casse, assembling a small fleet of colonial brigantines and sloops, embarked from Saint Dominique with 1500 men for Jamaica. He set sail down the southern coast to Carlisle Bay en route to Spanish Town which he planned to plunder. However, a militia company of planters and slaves successfully defended their ground, and Du Casse withdrew to St. Dominque, but not before destroying Carlisle Bay. "The expeditions richest prize was undoubtedly the 1300 to 3000 captured slaves, who proved crucial to the immediate, future prosperity of the French colony" (Pritchard p. 318) where, our narrator points out, they could be sold for 60 to 120 piastres each.
Narrated chronologically, the eye-witness account gives vivid testimony to the preparations, execution and aftermath of the expedition against Jamaica over the spring and summer months and into the fall of 1694 touching on the internal state of martial affairs between the Spanish and French on the divided island they occupied together. The narrator's lively digressions and personal reflections leave no doubt that he was on the spot when he comments on the disease, probably Yellow Fever, which ravaged the crews, the tremors under foot which incited fear of another earthquake like the one which flattened Port Royal two years before, the unexpected collateral encounters and skirmishes with the English in the area, related through colorful anecdotes, and the general atmosphere of depravation of the crews and the weakness of the Saint Dominique defenses against incursion by the Spanish as a result, in large part, to the lack of sufficient material support coming from France.
"If Du Casse could declare the attack on Jamaica a success, the same conclusion could not be made by the navy. By August, sickness was swiftly reducing crew numbers. Le Solide, which had been long in the Islands, was immediately sent back to France, her crew being too diminished for further use. Le Téméraire had lost 50 of her best sailors and the captain of the English prize now called Le Faucon had died. By September, L'Envieux had lost 100 men including her captain, and disease claimed Captain du Rollon of Le Téméraire. The four warships, including Le Hazardeux, departed Cap Francais in early October, but further disaster awaited them in the Atlantic" (Pritchard p.318)– storms, capture by the English, starvation, fire, shipwreck, disappearance and death. Of the 350 men who departed France at the beginning of the year only 130 returned by year's end.
*Collated against the copy at the Collection de la ville de Bordeaux, Bibliotheque municipale, see https://issuu.com/scduag/docs/bbx17016, a copy with numerous printer's creases significantly obscuring text; Pritchard, In Search of Empire: The French in the Americas, 1670-1730 (Cambridge, 2004); Charlevoix, Histoire de l'Isle Espagnole ou de S. Domingue (1731), vol. 2, p. 261. Not in Landis. (Inventory #: 6018)
$5,500.00 add to cart Available from Martayan Lan
Share this item
Martayan Lan, Inc.
Offered by