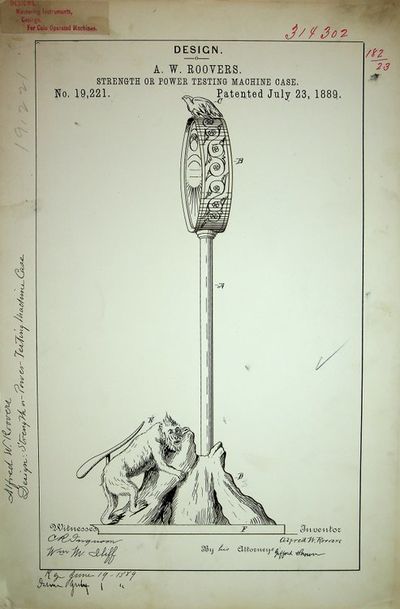 by Roovers, Alfred W.
Brooklyn, New York: Self-published, 1889. First Edition. Near Fine. First Edition. One sheet of 10 x 15 inch bristol board. Black ink on white paper. The assigned patent application serial number was 314,302 and it was received by the US Patent Office (USPTO) on June 14, 1889. The patent was issued on July 23, 1889, and given design patent number 19,221 with a term of seven years. We have included a printout of the patent text for reference.

NOTE: This is part of a collection of original design patent art we are selling. If you are interested in knowing about additional items please let us know. Hand-drawn patent drawings, while critical to the patent process, don't often appear for sale. With only the inventor, attorney, and USPTO the likely recipients, few were made, and after expiring many were discarded.

This patent design is a design for Strength or Power Testing Machine Case. "Roovers Brothers, Inc. was founded in 1883 (incorporated 1893) by Alexander H. and Alfred W. Roovers in Brooklyn, New York. Its industry is metal tape embossing machines and its headquarters were in Brooklyn, New York (1883-1959) and Old Forge, Pennsylvania (1960-1964). The company was acquired by Dymo Industries in 1960, who later merged its operations with another plant in 1964. The company dissolved shortly after." (mycompanies. fandom. site)

DESIGN PATENTS: what they are, how long they last, and records management

To obtain a Design patent, inventors submit an original black pen and ink drawing and a description of the innovation to the USPTO (typically with the assistance of a patent lawyer familiar with the process). The USPTO assigns the new application a "serial number" and "application date." USPTO patent examiners then vet the application to ensure it is unique and not already protected, often with additional communication between the USPTO, the inventor, and their legal representation. This process can take months if not years. Only if determined to be a new invention will the USPTO issue the inventor a Design Patent number and patent date.

During the active term of the design patent, the USPTO retains the inventor's application and drawings for use in patent dispute cases and other inquiries. After the term of the patent, the USPTO may discard or return the materials if no longer relevant to their core mission. Today, most issued patents are digitized for preservation. Older paper records and patent models have been periodically discarded most often with little fanfare and to address space or fiscal management issues. (Inventory #: 28160)
$193.00 add to cart or Buy Direct from Kuenzig Books
Share this item

A Selection of Massachusetts Laws Pertaining to Surveying and Real Property

[ Massachusetts ] : The Massachusetts Association of Land Surveyors and Civil Engineers, Inc , 1986
(click for more details about A Selection of Massachusetts Laws Pertaining to Surveying and Real Property)
View all from this seller>