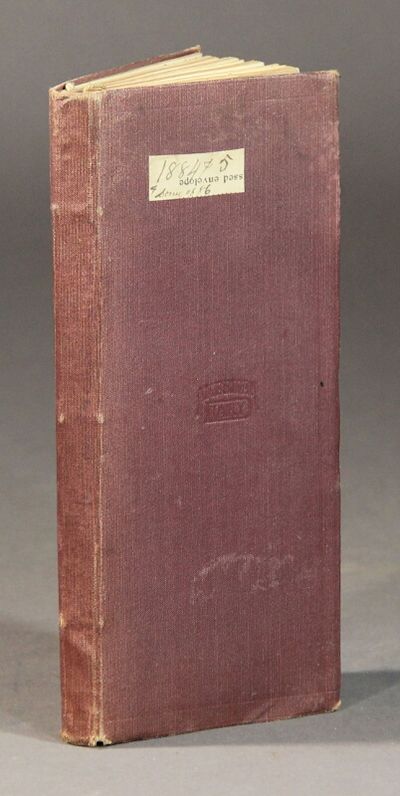 Madison, Lake County, Ohio, 1884. Pre-printed pocket book, 7¼" x 3" inches, titled "The American Diary for 1883," approx. 174 pages, with (mostly) chronological entries January 1884 to January 1886. Handwritten in ink, bright and legible. This closely written pocket diary was kept by a farmer who lived in the small town of Madison, in Lake County, Ohio. The place was determined by names found in the diary. A typical entry: "August 22, 1884. Therm 76/90, clear. A Scovill helped me from 9 OC until night threshing Clawson wheat for seed drawed in 2 loads of oats Mr Parmer stayed over night paid him $2.50 for music book: A Scovill takes my second crop clover: I am to cut it he takes care of it & puts it in the barn for one third of it..." Entry for January 21, 1884: "made bunk to Bob: Henry Bartlett was here, paid Jon Northwood $3 & a note for his father gave uncle Ira for $5 in Feb'y 1857 for any threshing bill for 1883 amount $7.90" The farmer attends services, notes crops sowed and harvested, purchases of supplies, and attends town meetings. Some other names mentioned are Philo Smith, Dr. Curtis, Chester Fulton, Ralph Savage, J. Speer, Charlie and Minnie (possibly his grown children), B.L. Gaylord, Henry Sanborn, George Stafford, and Hiram Lewes. Although the author of this diary is unknown, he mentions some family members; Ira, Irene, Seth, Mary, Alice. Probably either Mary or Alice was his wife. On March 13, 1884, he notes "our silver wedding" anniversary which would have been twenty-five years to the day that he was married. The town of Madison was named after President James Madison, and the first white Americans to settle in the region arrived in the late 1790s. The community grew relatively slowly, having less than eight hundred residents in 1880. For most of the nineteenth and early twentieth centuries, many residents earned their living as farmers or found employment in harbor communities on nearby Lake Erie. (Inventory #: 57726)
$258.75 add to cart or Buy Direct from
Rulon-Miller Books
Share this item

by Dorner, H., late of the Hamburg Zoological Garden & Aquarium

A major collection of more than 200 yacht registers

London, New York, et al. 2006
(click for more details about A major collection of more than 200 yacht registers)
View all from this seller>