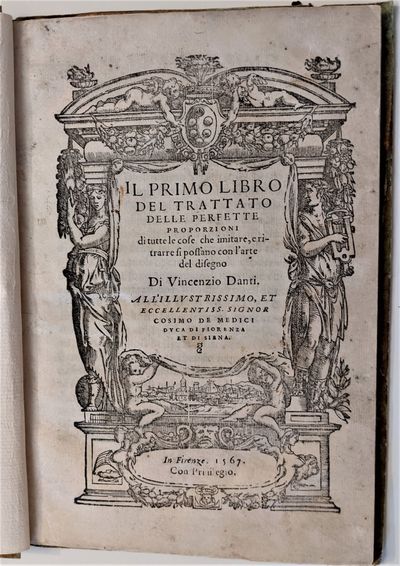 by Danti, Vincenzo
Firenze: (Torrentino), 1567. Small 4to. 227 x 155 mm., (9 x 6 inches). [8], 62 pp., wanting final blank. Title-page illustrated with a monumental architectural border in the mannerism style and floral and historiated initial letters throughout the volume.  Bound in 19th century decorated paper binding; some minor discoloration to the paper binding, otherwise very good.  Extremely rare printing of a contemporary treatise on the proportions of the human body, demonstrating the influence of Michelangelo's ideas of anatomy and the fine arts.  It was written by Vincenzo Danti, second son of the artists and engineer Giulio and brother of the mathematician Egnazio Danti, now remembered for his publication on architectural  perspective and Euclid.   Il Primo Libro is the only work by Vincenzo to survive and it was the first book in a series of fifteen projected studies that he intended to publish, based on the anatomical teachings of Michelangelo.  Danti grew up in Florence under the shadow of Michelangelo who died in 1565, and whose art and theories of art had a tremendous impact on the young painter.  "By rejecting the mathematical schemes of proportions, as had been proposed by Durer, Danti sees in anatomy studies a real rule for perfecting proportions, since he believed that the perfection of Michelangelo's figures lay in his understanding of the secrets of the human body" ( M. Daly Davies, p.68).   This publication brought Vincenzo recognition in Florence and he was elected to the Accademia Florentina just before his death in late 1567.   A book by David Summers, entitled Michael Angelo and the Language of Art, (Princeton, 1982) also makes this case and states that Danti's goal was to "find and reveal the 'secret' of Michelangelo's art rather than simply remembering the precepts of the noble master."  Though unfulfilled  Danti's masterplan was revealed in his brother Egnazio's book, Le scienze matematiche published in 1577, which contained a detailed description of Vincenzo's thoughts about painting, sculpture and drawing and the application of proportionality to each.  Each of these categories is then broken down into sub categories and it become clear from the outline that Vincenzo's goal was produce in fifteen parts, a complete theory of art as it relates to the human anatomy and Michelangelo's faithful representation of the human body as he saw it.   OCLC cites copy cited in the Berenson Library at I Tatti.  Not cited in NUC, OCLC, the British Library, Berlin Katalog, nor Adams. Not in Mortimer.  Not in the Getty Library or the National Gallery of Art Library  Not in the Ekstrom Collection, not in British Architectural Library; not known to Vagnetti, De naturali et artificiali perspectiva.  Cicognara 313. See E. Steinmann and R. Wittkower, Michelangelo Bibliographie, no. 539 ("von grosster Seltenheit" (extremely rare)); Schlosser-Magnino p. 386-7;   See M. Daley Davis: "Beyond the Primo libro of Vincenzo Danti's Trattato...", in Mitteilungen des kunsthistorischen Instituts in Florenz, XXVI, 1982, pp. 62-84 for a detailed discussion of Danti, his family of artists, and a detailed discussion of this work.  . (Inventory #: 743)
$12,000.00 add to cart Available from
De Simone Company
Share this item
De Simone Company, Booksellers
Offered by