History of the Decline and Fall of the Roman Empire 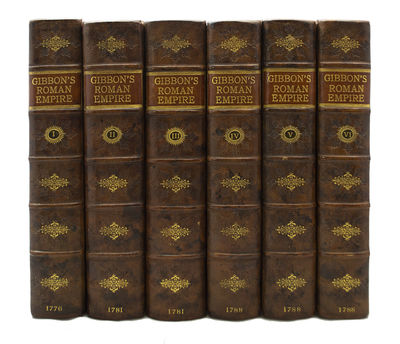 by GIBBON, Edward
ìMasterpiece of Historical Penetration and Literary Styleî GIBBON, Edward. The History of the Decline and Fall of the Roman Empire. London: Printed for A. Strahan; and T. Cadell, 1776-1788. First edition. Six volumes, quarto (10 3/4 x 8 1/2 inches; 270 x 220 mm. Engraved portrait of Gibbon by Hall after Reynolds, not usually found (bound in volume II). With three engraved folding maps bound in volume II (one of them normally found in volume III). With all the half titles and the errata leaves in Volumes I, II, III, and VI (Volume VI errata covers volumes IV, V and VI). With twelve pages of Contents for Volume I at the beginning of Volume II. Volume I has more than half of the errata uncorrected which would make it an intermediate state. According to Sterling, " Vol. I only was published in 1776. It was originally planned to print 500 copies of this first edition, but after 26 sheets were completed, it was decided to increase the number to 1000. The type of the earlier sheets had by that time been distributed, so when they were set up again, the opportunity was taken to correct the numerous errata and to print the text of the cancel leaves which, for some unknown reason, had been substituted for the original leaves. Vols. II and III were were published together in 1781." In Volume III, p. 177 is correctly numbered, and ìHonoriousî is left uncorrected on p. 179, line 18. G1 and Ll1 cancels in volume 2 (signed G* and *Ll), H3 and L2 cancels in volume 4 (the latter signed *L2). The engraved portrait of Gibbon was issued separately in 1780. Contemporary tree calf, all volumes attractively and uniformly rebacked. Gilt spines with gilt tool in compartments, morocco spine labels, lettered in gilt and small morocco lozenge with volume numbers. All edges yellow. Extremities slightly rubbed. Some light intermittent foxing but generally very clean. Small bookplate on front pastedown of each volume. With a repaired closed tear to the last leaf of volume II. Overall a very good set. A ìmasterpiece of historical penetration and literary style,î Gibbonís Decline and Fall brought to the subject a width of vision and a critical mastery of the available sources which have not been equaled to this day. "This masterpiece of historical penetration and literary style has remained one of the ageless historical works which, like the writings of Macaulay and Mommsen, maintain their hold upon the layman and continue to stimulate the scholar although they have been superseded in many, if not most, details by subsequent advance of research and changes in the climate of opinion. Whereas other eighteenth-century writers in this field, such as Voltaire, are still quoted with respect, the Decline and Fall is the only historical narrative prior to Macaulay which continues to be reprinted and actually read" (Printing and the Mind of Man). Although superseded in many respects by two centuries of continuous research, this great work is still read, both for pleasure and for profit, and has achieved an eminence denied most historical compilations of its kind. Grolier, 100 English, 58. Norton 20, 23, and 29. Printing and the Mind of Man 222. Rothschild 942-944. Sterling 382. HBS 68352. $26,500 (Inventory #: 68352)
$26,500.00 add to cart Available from
Heritage Book Shop
Share this item