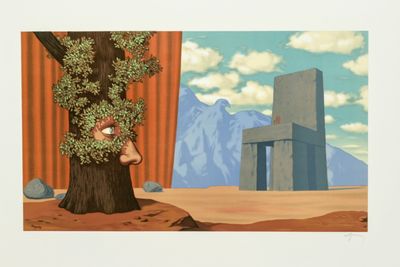 by MAGRITTE, RENÉ; SCUTENAIRE, LOUIS
Paris: A.C. Mazo et Cie, 1968. First edition. Original portfolio box. Fine. VERY RARE LIMITED EDITION OF SURREALIST MASTER RENÉ MAGRITTE'S LES ENFANTS TROUVÉS, COMPLETE WITH TWELVE BREATHTAKING LITHOGRAPHS. ONE OF ONLY 350 COPIES. "The art of René Magritte has had an influence far exceeding the confines of the art world. Imagery adapted from his paintings has been widely disseminated for more than half a century through advertising, cartoons, film, book jackets, and popular music... His work has continued to appeal to modern audiences hungry for the puzzling conjunctions of the everyday and the fantastic... The inscrutable nature of Magritte's work--coded, self-referential, and incongruous--has [moreover] intrigued several generations of artists," (Stephanie Barron).

The first four illustrations (numbered recto) are magnificently unique, conceived by Magritte specifically for this production. While certainly distinctive, these images--as well as the final eight--represent a summary of his favorite ideas and symbols, many taken from recent pictures: the clouds, female torsos, and birds, to name a few.

Eight following illustrations were originally created by Magritte for his mural "The Enchanted Domain". An awing 360-degree eight-panel mural, the masterpiece was painted to fulfill a commission by Gustave J. Nellens, owner of the Casino Communal at Knokke-Le-Zoute in Belgium. A massive undertaking for a famously reclusive artist, Magritte commented:

"When asked to devise a series of pictures for the walls of a Casino gaming room, I did not think along the lines expected of me... My intention is to offer an artistic spectacle of some significance, and convey a hitherto unknown feeling, a feeling in keeping with the attitude appropriate to a person living in the universe," (Elle, 1953).

Nellens himself amassed quite a significant amount of Magritte art; his collection of paintings and lithographs is, even today, unparalleled.

Accompanying poem (in French) by Louis Scutenaire, a poet, close confidant of Magritte, and central figure of the Belgian Surrealist movement.