AN ACCOUNT OF A MEETING WITH DENIZENS OF ANOTHER WORLD 1871 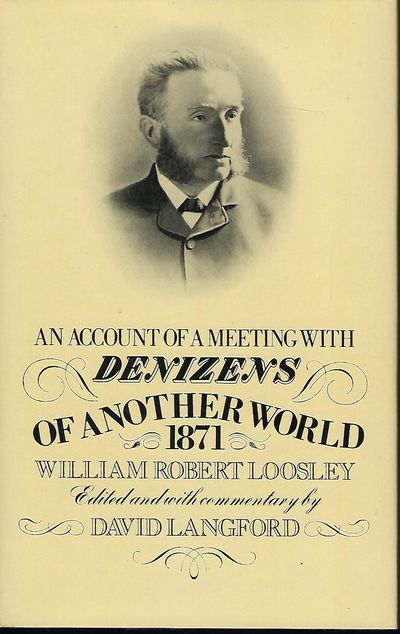 by LOOSLEY, William Robert
London: David & Charles, 1979. First Edition. Signed by Langford on the title page. On October 4, 1871, English builder and undertaker William Robert Loosley had an experience that not only would he never speak of, but his written account of it wouldn't be discovered for over a hundred years when Loosley's great-great-granddaughter discovered it locked away in his hidden deck drawer. Had Loosley discovered what appeared to be an alien scouter probe, sent to Earth on a fact-finding mission? Real or a hoax? "The manuscript has withstood every test of authenticity. It is clearly not a fabrication, because the man's death in 1893 rules out the possibility that he could describe the scientific concepts apparent in this tale!"- David Langford. An American edition was issued in 1980. 8vo., black boards in dust jacket; 96 pages. Edited & With Commentary By David Langford.. Fine in very near fine d/j. (Inventory #: 57229)
$45.00 add to cart or Buy Direct from Antic Hay Books
Share this item
Antic Hay Books
Offered by