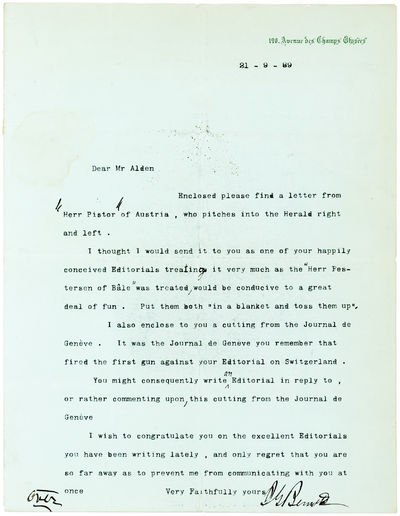 by BENNETT, JAMES GORDON, JR.
BENNETT, JAMES GORDON, JR. (1841-1914). Editor of the New York Herald. TLS. With a lengthy, signed holograph postscript. (Signed twice: "J.G. Bennett"). 2pp. 4to. Paris, September 21, 1889. On Avenue des Champs Elysees stationery. To American journalist, diplomat and popularizer of canoeing WILLIAM LIVINGSTONE ALDEN (1837-1908).
"Enclosed please find a letter from 'Herr Pistor' of Austria, who pitches into the Herald right and left. I thought I would send it to you as one of your happily conceived Editorials treating it very much as the 'Herr Festersen of Bâle' was treated, would be conducive to a great deal of fun. Put them both 'in a blanket and toss them up.'

[In holograph:]
P.S. What have you decided to do? To remain in Italy or to come to Paris? How large a salary to remain in Italy Rome for instance... how much to come live in Paris? Kindly answer at your leisure [?]..."
The son of the founder of the New York Herald, Bennett was an eccentric bachelor who gained journalistic prominence for orchestrating Sir Henry M. Stanley's successful search for David Livingstone in Africa. Although Bennett's eccentricity and bravado initially fueled the Herald's
success, it ultimately became the cause of its downfall. Bennett's erratic editorial judgment and news policies damaged both the morale of his staff as well as the paper's reputation for reliability. In addition, Bennett's predilection for lavish entertaining dissipated the newspaper's resources. By the outbreak of World War I, the Herald
was in an increasingly precarious financial position, and, by the time Bennett died, it was operating at a huge deficit.
Alden practiced law prior to embarking on a successful career as a journalist for Scribner's Monthly, The Atlantic, New York World, Daily Graphic, and New York Times. In 1871, he founded the New York Canoe Club and is credited with bringing the sport of canoeing to the United States. In 1885, President Grover Cleveland appointed him general consul in Rome, a position he held through 1890. Alden did, in fact, accept Bennett's offer to join him in Paris where he worked as a correspondent for the Herald.


Written on pages one and four of a slightly worn and stained folded sheet of stationery. Numerous minor holograph corrections to the typed portion. With two remnants of prior mounting on the fourth page. In very good condition. A fine letter and surprisingly rare. (Inventory #: 21176)
$350.00 add to cart Available from
Lion Heart Autographs
Share this item