THE STORY OF THE CENTURY: DUNFERMLINE CO-OPERATIVE SOCIETY LIMITED 1861-1961 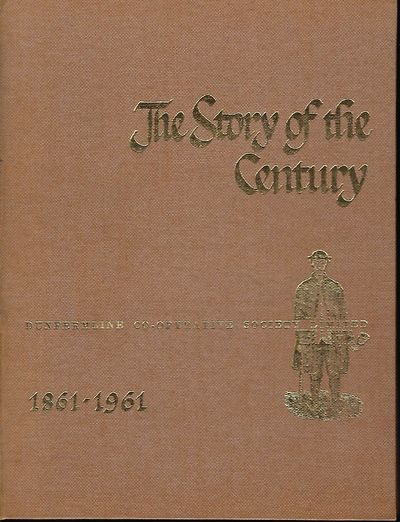 by [HUNT, W.D.]
[Shieldhall, Glasgow: The Scottish Co-operative Wholesale Society, 1965. First Edition. Inscribed in the lower corner of the front endpaper: "Best wishes, P. Douglas, 31/5/65." Douglas was on the Council of Lauder Technical College in 1965 and is listed in the laid-in program. A history of this famous Scottish co-operative. Enclosed is a program from the 150th anniversary of the birth of George Lauder, held at Lauder Technical College on May 31, 1965. Speakers and other prominent attendees have their names underlined in red pencil, including Phillip Douglas. Also laid in is a copy of a short (speech?) with the pencil name of "Netta Dunnett." Lauder Technical School was founded in 1869 and funded by Andrew Carnegie who named it after his uncle, George Lauder, who had been a campaigner for free technical education. A textile school, founded in 1910 and also funded by Carnegie, later merged with the technical school in 1927. The school became known as a technical college in 1951 and the name was then shortened to Lauder College in the late 20th century before becoming Carnegie College in 2007. A scarce book, signed, and with interesting inserts. 8vo., pictorial brown cloth, stamped in gilt; 61 pages. Issued without a dust jacket. Illustrated.. Very Good (gilt bright, some rippling sown spine, tiny bit of light discoloration rear cover; contents clean & tight with little rippling to pastedowns). A scarce book! (Inventory #: 57235)
$125.00 add to cart or Buy Direct from Antic Hay Books
Share this item
Antic Hay Books
Offered by