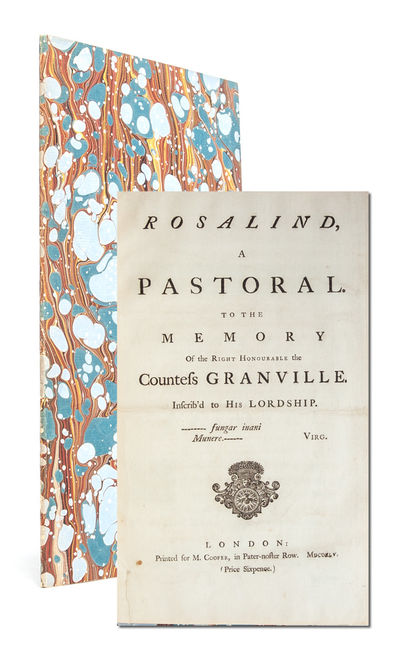 by Anonymous
London: Printed for M. Cooper in Pater-Noster Row, 1745. First edition. Fine. Recent marbled card wrappers. Bookplate of J.O. Edwards to front pastedown. Folio measuring 195 x 310mm and collating 7, [1]: complete. Pro-Patria watermark as called for. Internally a wide margined and fresh copy, with a slight central fold across the title page and small paper repair to the inner margin of same page not affecting text. An exceedingly scarce work in praise of a woman who generated feminist shockwaves in her all too brief life, ESTC lists only five known copies. It has never before appeared at auction, and the present is the only one on the market.

An anonymous poetical tribute to the Lady Sophia Fermor, whose writing had already placed her among England's intellectual elite and whose two years' marriage to John Certeret, second Earl Granville additionally placed her within London's political power center before her early death at age 24. Hailed by Lady Mary Wortley Montagu as having "few equals in beauty or graces" (ODNB), she was also the thinly veiled author of the revolutionary feminist tract Woman Not Inferior to Man, or A Short and Modest Vindication of the Natural Right of the Fair Sext to a Perfect Equality of Power (1739). Released before her marriage with the by-line of "Sophia, a Person of Quality" and predating Wollstonecraft's Vindication of the Rights of Woman by nearly half a century, the book was a sensation. Pointing to unequal access to education and unfair treatment under the law as the only reasons for women's cultural inferiority, Lady Sophia "exhorted all my sex...to betake themselves to the improvement of their minds and...shew our selves worthy...Let us shew them, by what little we do without aid of education, the much we might do if they did us justice" (Woman Not Inferior). Her marriage was a companionate and loving one, both gossiped about and admired. And her loss to puerperal fever in 1745 was felt widely.

The present work was a tribute to Lady Sophia's irreplaceability. Though on the surface fixated on her external beauty, the verses constantly recall women of Ovid and Shakespeare whose uniqueness stemmed from their interior strength and their ability to move others to action. The pastoral emphasis and the name Rosalind immediately evoke Shakespeare's headstrong and outspoken heroine from As You Like It, who escaped the injustices of men by dressing and acting as one to protect herself and her best friend. In the poem, Rosalind's disappearance to the land of the shades, away from her husband Albino's gaze, references Eurydice whose life and death inspired Orpheus' powerful songs. And the narrator's pleas for owls and nightingales to quiet themselves harken to stories of female anger and revenge (notably Philomela, who surived brutality to take her vengeance). The result is something more learned and serious, a celebration of a complex woman who could have given more if only she had more time.