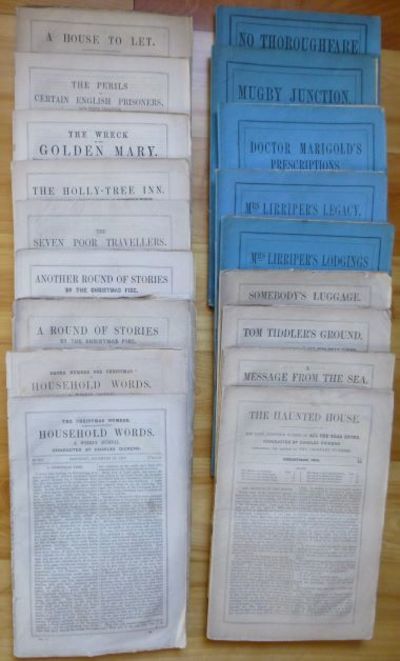 by Dickens, Charles
1850. This is a complete set Dickens's annual "Extra Christmas Numbers" -- all nine of HOUSEHOLD WORDS, followed by all nine of ALL THE YEAR ROUND. London: Dec. 1850 - Dec. 1858 and Dec. 1859 - Dec. 1867. Original self-wrappers (first 13 numbers) and original blue printed wrappers (last five numbers) -- as issued. First Editions of all eighteen pieces. Dickens was the editor (or "conductor") of both of these periodicals -- one rising out of the ashes of the other -- but he also wrote at least part of the Christmas story in each of these eighteen numbers. The stories in HOUSEHOLD WORDS are: 1850 ("A Christmas Tree" is by CD) 1851 ("What Christmas is, as we Grow Older" is by CD) 1852 A ROUND OF STORIES ("The Poor Relation's Story" and "The Child's Story" are by CD) 1853 ANOTHER ROUND OF STORIES ("The Schoolboy's Story" and "Nobody's Story" are by CD) 1854 THE SEVEN POOR TRAVELLERS ("The First Poor Traveller" and "The Road" are by CD) 1855 THE HOLLY-TREE INN ("The Guest," "The Boots" and "The Bill" are by CD; the rest is by Wilkie Collins) 1856 THE WRECK OF THE GOLDEN MARY (most of "The Wreck" plus the hymn on p. 21 are by CD; the rest is by Wilkie Collins) 1857 THE PERILS OF CERTAIN ENGLISH PRISONERS (chapters I and III are by CD; chapter II is by Wilkie Collins) 1858 A HOUSE TO LET ("Going into Society" is by CD) The stories in ALL THE YEAR ROUND are: 1859 THE HAUNTED HOUSE ("The Mortals in the House," "The Ghost in Master B's Room" and "The Ghost in the Corner Room" are by CD -- as well as all but one of the other opening paragraphs) 1860 A MESSAGE FROM THE SEA (chapters I, II and V, plus passages in other chapters, are by CD; the rest is by Wilkie Collins) 1861 TOM TIDDLER'S GROUND (chapters I, VI and VII are by CD) 1862 SOMEBODY'S LUGGAGE (the first, second, part of the third, seventh and tenth chapters are by CD) 1863 MRS. LIRRIPER'S LODGINGS (chapters I and VII are by CD) 1864 MRS. LIRRIPER'S LEGACY (chapters I and VII are by CD) 1865 DOCTOR MARIGOLD'S PRESCRIPTIONS (chapters I, VI and VIII are by CD) 1866 MUGBY JUNCTION (the first four chapters are by CD -- as indicated on the front cover) 1867 NO THOROUGHFARE (the Overture, Act III, and parts of Acts I and IV are by CD; the rest is by Wilkie Collins, listed as co-author) All eighteen numbers are in very good-plus or near-fine condition, with only very minor edge-wear and soil (though the 1851 issue has a couple of closed tears on the front wrapper and an ink-mark on the rear). Five of the numbers (HhW 1854 through 1858) still have unopened leaves; a few appear that they might once have been bound up (though not trimmed or anything). They are housed in a modern cloth case with inner chemise. Though the last five numbers (the ones in blue wrappers) are not uncommon, the others have become rather scarce; it is now quite unusual to encounter a complete collection of all eighteen. Eckel pp 193-197 ("In good state they [a complete set] are hard to find" -- this in 1932!). (Inventory #: 14629)
$2,950.00 add to cart or Buy Direct from
Sumner & Stillman
Share this item

THE SCARLET LETTER. A Romance

1850
(click for more details about THE SCARLET LETTER. A Romance)

THE MYSTERY OF EDWIN DROOD