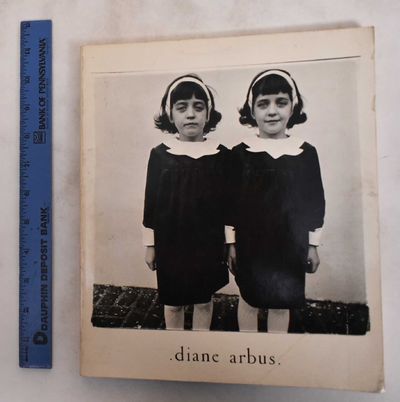 by Arbus, Doon; Israel, Marvin
Millerton, New York: Aperture, 1972. Softcover. VG/Fair, covers show heavy wear and scuff marks, corners bumped. Pages are clean and tight.. Pictorial glossy covers. 8 unnumbered pages, 15 pages, 161 unnumbered pages : illustrations, 80 portraits. "Published just after her untimely death in 1971, this book--whether or not aided by the artist's notoriety--has achieved massive sales for a volume of such uncompromising photographs. Edited by Doon Arbus and Marvin Israel, its titled implies a mere trawl through her best-known images. It is that, but it also a brilliant exposé of American life. ... While it is true that she often photographed those outside society's norms, a more pertinent observation is that if she made 'normals' look like 'freaks', she also made 'freaks' look like 'normals'. Furthermore, her exploration of normalcy was complicated by gender issues. In her aggressive, full frontal 'exploitation' of her subjects, Arbus appropriated an essentially male convention: that of staring. Indeed, it may well be her assumption of this prerogative of masculine domination that has attracted much of the negative comment, compounded by her undercutting of gender stereotypes. She was a great feminist photographer. Her women and girls are invariably strong--like the confident twins [on the cover of the book]--and her men are frequently damaged or uncomfortable in their surroundings."--The Photobook : A History Volume I / Martin Parr and Gerry Badger. London : Phaidon, 2004. Special edition for MOMA. (Inventory #: 181204)
$170.00 add to cart or Buy Direct from Mullen Books
Share this item