Elements of Jurisprudence [Bound with] Maxims and Rules of Pleading.. 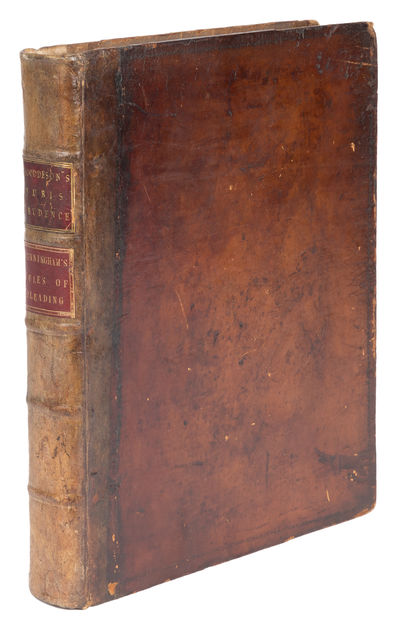 by Wooddeson, Richard; Heath, Sir Robert. Cunningham
1783. The Complement of Sir W. Blackstone's Commentaries" Bound With "A Work of Great Authority" for Special Pleaders Wooddeson, Richard [1745-1822]. Elements of Jurisprudence, Treated of in the Preliminary Part of a Course of Lectures on the Laws of England. London: Printed for T. Payne and Son, 1783. [iv], 118 pp. [Bound with] Heath, Sir Robert [1575-1649]. Cunningham, Timothy [d.1789], Editor. Maxims and Rules of Pleading, In Actions Real, Personal, and Mixed, Popular and Penal: Describing that Nature of Declarations, Pleas, Replications, Rejoinders, And All Other Parts of Pleading; Shewing Their Validity and Defects, And in What Cases They Are Amendable by the Court, Or Remediable by the Statute-Law, Or Otherwise: Likewise, Which of the Parties in His Plea Shall First Offer the Issue, And Where Special Matter May be Given in Evidence Upon the General Issue; Of Demurrers Upon Evidence; Of Verdicts, General and Special, And of Bills of Exceptions to the Same; Of Judgments, Execution, Writs of Error and False Judgment; And of Appeals, Indictments, and Informations, and Pleadings Relating Thereunto. First Published in Octavo, in the Year 1694, From the Manuscript of Sir Robert Heath. Now Re-Published in Quarto, With Notes, Observations, And Additions of New Matter to Every Title, From All the Late Reports and Abridgments. London: Printed by His Majesty's Law Printers, 1771. x, 252 [8] pp. Quarto (10" x 8"). Contemporary calf, rebacked in period style, blind fillets to board, raised bands an retained existing lettering pieces to spine, hinges mended, some scuffing to boards, moderate rubbing to board edges, some wear to corners. Moderate toning, somewhat heavier in places, occasional faint dampspotting and foxing, crease to leaf Y of Maxims (pp. 161-162) and minor loss to headline of following leaf due to printer error, two early owner signatures to title page of Elements, one struck through. A very good copy. $2,000. * Elements: first edition; Maxims: second and final edition, one of two issues from 1771. Wooddeson was elected a Vinerian Scholar in 1766, became a Vinerian Fellow in 1776 and was Vinerian Professor from 1777 to 1793. He was steeped in Blackstone's work, and he strove to supplement it. "Dr. Wooddeson's Lectures form, in a measure, the complement of Sir W. Blackstone's Commenta. (Inventory #: 71494)
$2,000.00 add to cart or Buy Direct from
Lawbook Exchange
Share this item

1739
(click for more details about A Methodical Treatise of Replevins, Distresses, Avowries..)
View all from this seller>