Thirty Pieces of Silver; a play in three acts [*SIGNED*] 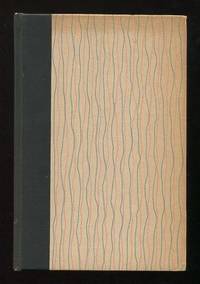 by Fast, Howard
New York: The Blue Heron Press, Inc.. Very Good. (c.1954). First Edition. Hardcover. (quarter black cloth over patterned paper-covered boards; no dust jacket) [light wear to book at extremities, spine slightly turned, spine cloth slightly faded, some uneven browning to front cover; ownership signature at upper left corner of front pastedown]. SIGNED by the author (no inscription) on the front endpaper, where "#593" is also written. (Was this a numbered/limited edition? It's not specified anywhere within the book itself.) Drama, set in Washington DC in 1948, dealing with the effects of the anti-Communist witch hunts on a young government employee, his wife, and their African-American maid. The author details, in his Introduction, how the play, originally written in 1947, was impossible to produce in the U.S. due to its political content and the author's own left-wing politics, and was staged first in Australia and later in Prague and other European cities. (He relates that "at one point during 1952, productions were running simultaneously in Berlin, Vienna, Budapest, Warsaw, Pilsen and Moscow," with openings in Antwerp, Rome and Canada scheduled for 1953.) Signed by Author . (Inventory #: 26286)
$20.00 add to cart Available from ReadInk
Share this item
ReadInk
Offered by

Heaven's Not Far Away

New York : Dodd, Mead & Company , 1942
(click for more details about Heaven's Not Far Away)
View all from this seller>