Salt; or, The Education of Griffith Adams [*SIGNED*] 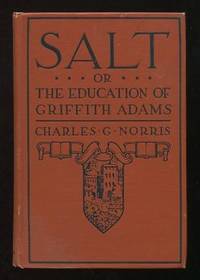 by Norris, Charles G.
New York: E.P. Dutton and Company. Very Good. (c.1918). First Edition. Hardcover. (no dust jacket) [modest wear to book extremities, light dust-soiling and age-toning to edges of text block]. INSCRIBED and SIGNED by the author on the front endpaper: "To Arthur F. Kales -- / with whom I share / many happy memories / of undergraduate life. / Affectionately / Charles G. Norris / Camp Dix, N.J. / June 1918." Norris's second novel, the tale of a young man's troubled passage through the American education system and into his working life. Per critic Richard Allan Davison (in DLB 9), the book's "depictions of the lack of academic rigor in midwestern universities in the pre-World War I period, replete with cheating, college pranks, fraternity rushing and initiation, and social conformity, are masterly." (Weirdly, though, the book doesn't even rate a mention in John O. Lyons's study "The College Novel in America," perhaps because that's not its exclusive focus.) Norris himself was educated at the University of California, as was the inscribee (both were Class of 1903); Kales took his degree in law, but later achieved some success as a photographer, working in the Pictorialist style. Tthe date and place of the inscription would suggest that Norris and Kales met up again, post-university, during the waning months of World War I, when Norris was still in the U.S. Army, engaged in the training of troops at Camp Dix (later Fort Dix). (He eventually attained the rank of Major, but apparently never saw combat in France.) Signed by Author . (Inventory #: 26285)
$100.00 add to cart Available from ReadInk
Share this item
ReadInk
Offered by