Francesco Griffo da Bologna - Fragments & GlimpsesThe life and work of the man who cut types for Aldus Manutius. With a leaf from the Aldine 1502 edition of Ovid’s Heroidvm epistolae set in Griffo’s first italic type. 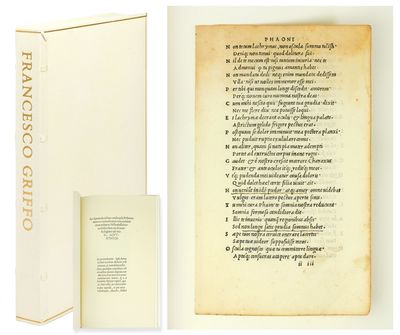 by Heavenly Monkey.
8vo. Vancouver: Heavenly Monkey, 2020. 8vo, (6 x 9 inches), 114 pp. Full stiff vellum ruled in gilt, blue cloth box, by Claudia Cohen. As issued, new (sold out before publication). § Limited to 15 copies bound by Claudia Cohen in stiff vellum, with a slipcase box. These copies include proofs of the book’s illustrations printed on F.J. Head paper. Fragments & Glimpses is set in roman and italic Bembo, with initial letters adapted from the ones attributed to Griffo in Paulus de Middelburgh’s Paulina de recta Paschae (1512). The edition was printed on dampened Arches wove paper. The first half of this book is a biography of Griffo's life and work, assembled from quotations taken from over four dozen sources spanning the 15th to 20th centuries, structured both thematically (i.e. The Roman Types, The Greek Types, After Aldus) and chronologically.The second half contains translations of four 19th century texts at the heart of Griffo's rediscovery, after being lost to history and then mis-identified as the artist Francesco Raibolini. These translations, by Emma Mandley, were commissioned by Heavenly Monkey, and we believe it is the first time these texts have been published in English. They include the New Appendix added to Antonio Panizzi's second (1873) edition of his pamphlet Chi era Francesco da Bologna?; excerpts from Giacomo Manzoni's introduction in Studii di bibliografia analitica (1882); Adamo Rossi's "The Last Word on the Question of Francesco da Bologna's Surname"; and an excerpt from Emilio Orioli's Contribution to the History of Printing in Bologna (1899).At the center of the book is an original leaf from Aldus's 1502 edition of Heroidvm. (Inventory #: 123683)
$2,750.00 add to cart or Buy Direct from
John Windle, Bookseller
Share this item

Floral Gems. A Gift for all Seasons. Vol. IX

New York : Burdick and Scovill
(click for more details about Floral Gems. A Gift for all Seasons. Vol. IX)
View all from this seller>