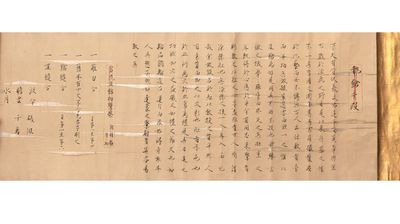 by SOJUTSU, ART OF THE SPEAR
Scroll (365 x 5560 mm.), with gold endpaper at beginning, on a wooden roller. [Japan]: at end, in trans.: "this secret information was given by Shichibei Itsuki to Shingobei Saijo in 1769." The spear (yari) was one of the primary weapons used in the feudal period of Japan. Many variations of the head of the spear were developed, some for thrusting by foot soldiers and some for slashing, designed for men on horseback. This finely illustrated scroll describes the teachings of the Oshima ryu (school) of fighting with a spear (sojutsu). The Oshima ryu traces its origins to the 16th century and the first prominent teacher was Yoshitsuna Oshima (1588-1657). He taught the fiefdom lord of Kii Wakayama, Yorinobu Tokugawa (1602-71), the tenth son of Ieyasu Tokugawa. The school continued for several centuries, with branches throughout Japan. The scroll is beautifully heightened with gold and silver motifs of mist throughout. It begins with a history of the school and its essential tenets and disciplines necessary to fight skillfully with a spear. The following text describes the varieties of spearheads used by the school (naginata, jumonji, two kinds of kagi), techniques of handling the spears (using wonderfully poetic phrases), physical positioning of the body for the most efficient use of the spear, the nuances of movement in combat, and additional remarks. The motto of the school, given next, is, in rough translation, "Reach high for the school's knowledge with a clear and sharp mind, and focus on understanding your opponent." Following this are a series of illustrations, beginning with icons of the school and five illustrations of different spears and spearheads. For each spear, measurements are given. Each spearhead is painted with gold pigment. At the end, there is written a certificate granting permission to transmit this secret information and, then, a most valuable family tree of the primary teachers of the Oshima school, beginning with Yoshitsuna Oshima. Finally, there is the seal of Shichibei Itsuki, the provider of this secret information. In fine condition. (Inventory #: 7413)
$4,750.00 add to cart or Buy Direct from
Jonathan A. Hill, Bookseller
Share this item
Jonathan A. Hill, Bookseller, Inc.
Offered by