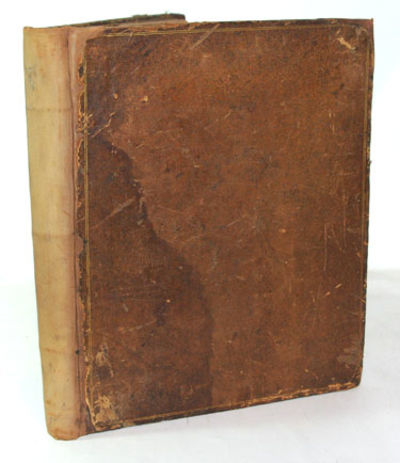 by Anonymous
London: n.p., 1741. First Edition. Very good in full leather covered boards with a rebacked leather spine with gilt double borders around the edges of the boards. A small quarto of 9 1/2 by 7 3/4 inches with moderate wear and rubbing around the edges of the boards, two early prior owner's names on the first free end page and the ghost of what may have been an owner's book plate on the last paste down. There is evidence of this volume having been an exlibrary copy which evidence is limited to the notation "Case 2 | B972gb" on the verso of the title page. The full title of this printing is: "Extracts From the Several Treaties Subsisting Between Great-Britain And Other Kingdoms and States, Of Such Articles and Clauses as relate to the Duty and Conduct of the Cammanders of the King of Great-Britain's Ships of War. Together With Such Articles of Later Treaties, as Revive or Confirm any Former Treaties, which bear any Relation to the same.180 pages including an index, appendices and text. Illustrated with a color frontispiece and with images from black 264 pages of text summarizing treaties with France, Spain, Holland, Austrian Netherlands, Russia, Sweden, Denmark, Savoy, Turky (sic), Morocco, Algiers, Tripoly, and Tunis. Illustrated with an engraved nautically related frontispiece. (Inventory #: TB31732)
$475.00 add to cart Available from
Town's End Books
Share this item

The Celebrated Jumping Frog of Calaveras County And Other Sketches

n.p. : Westvaco, West Virginia Pulp and Paper Company , 1959
(click for more details about The Celebrated Jumping Frog of Calaveras County And Other Sketches)
View all from this seller>