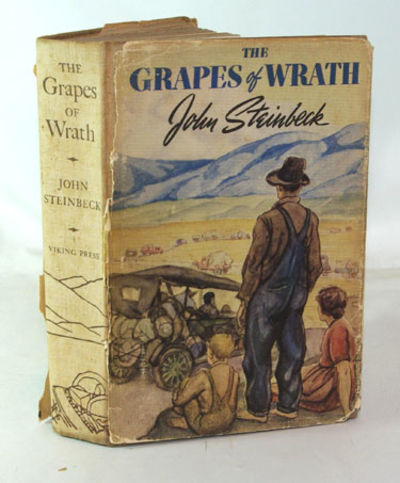 by Steinbeck, John
New York: The Viking Press, 1939. First Edition. Very good in illustrated beige cloth covered boards with brown text on the spine, line drawings in brown on the front and rear boards and with illustrated end sheets. The top edge of the text block is stained a pale yellow, but is dust stained. The lower 1/4 inch of the edges of the spine and boards are soiled and the fore edge of the text block shows a number of small foxing stains. The dust jacket is the original first edition jacket with both the price ($2.75) and "First Edition" slugs in place on the front flap. Overall the jacket is in poor condition with the entire spine area missing and with heavy rubbing to the folds and edges of the panels. Steinbeck won the Pulitzer Prize for fiction in 1940 with this novel of the Depression Era, dust bowl immigrants to California from Oklahoma. 619 pages of text. (Goldstone & Payne, A12) The 1940 movie version of the book was produced by Darryl F. Zanuck for 20th Century Fox, it was directed by John Ford, and starred Henry Fonda. A true high spot of American literature. (Inventory #: TB31733)
$800.00 add to cart Available from
Town's End Books
Share this item

A Week on the Concord and Merrimack Rivers

Avon, Conn. : The Limited Editions Club , 1975
(click for more details about A Week on the Concord and Merrimack Rivers)
View all from this seller>