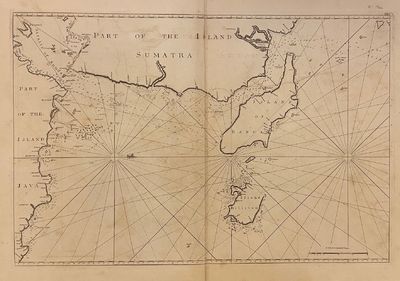 by GREGORY, Henry
London: Henry Gregory, 1766. unbound. Sea chart. Uncolored engraving. Image measures 19 5/8" x 29 1/4" inches, sheet measures 22 1/2" x 32 1/8"inches. Striking sea chart based on a VOC manuscript map; fathoms, depths rocks and safe soundings are noted. The map depicts the Straits of Sunda, a important sailing route connecting the Pacific and Indian Oceans; part of the island of Sumatra, and part of west Java, including Batavia, or present-day Jakarta; as well as the Island of Banca (Bangka), and Island Billiton (Belitung). Oriented with North towards the left, the island of Belitung lies East of Sumatra, and its beaches are known for their rounded granite boulders, fine sand, and calm waters. It is also the location of a large shipwreck during the Tang dynasty, known as the Belitung wreck; the contents of which are now housed in the Asia Civilization Museum, offering insight into maritime trading and commerce in the South China Sea a thousand years before the Dutch and English began trading in the region.This map is in very good condition, with minor offsetting throughout and some small stains, as expected with these charts. Henry Gregory (1744-1782) was a British mathematical and optical instrument maker. One of his azimuth compasses accompanied James Cook on his second voyage to the Pacific (1772-1775). The chart appeared as one of 46 in "A New Directory for the East Indies". This directory was designed for professional rather than popular use and valued in commercial as well as military navigation. As many of these maps were destroyed by the wear and tear of sea travel, this chart is an exceptional document of this active region, both yesterday and today. (Inventory #: 298286)
$500.00 add to cart or Buy Direct from
Argosy Book Store
Share this item