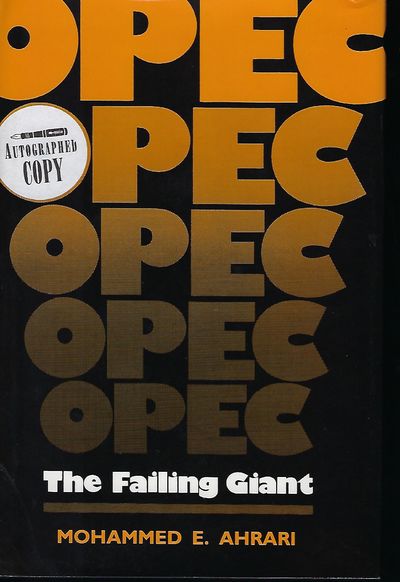 by AHRARI, Mohammed E.
[Lexington]: The University Press Of Kentucky, 1986. First Edition. Signed presentation from Ahrari on the half-title page: "To: Frank Klingberg, a perfect combination of a gentleman & scholar, your friend Mohammed E. Ahrari. March 11, '86." Klingberg , who died in 2008, taught political science and was Professor Emeritus at Southern Illinois University. The Frank L. Klingberg Youth World Scholarship, which honors the teaching and research activities of Klingberg, was first awarded in 1986 and given to an undergraduate majoring in political science with a focus on international relations and/or comparative politics. He was known nationally and internationally for his theory of cycles in American foreign policy. He was an active member of the Midwest Political Science Association and the American Political Science Association. Ahrari's historical study focuses on the OPEC oil cartel and his argument that economic forces, not politics, determine OPEC's action in the world arena. He is a political science professor at West Carolina University. A nice association copy. Signed copies of this title are uncommon!. Tall 8vo., black cloth in dust jacket; 256 pages. Fine (covers nice; contents clean & tight); very minor wear (small tear & tiny internal repair with clear tape to head of spine) d/j. (Inventory #: 57254)
$85.00 add to cart or Buy Direct from Antic Hay Books
Share this item
Antic Hay Books
Offered by

THE ISLAND STEAMERS: A CHRONOLOGY OF STEAM TRANSPORTATION TO ND FROM THE OFFSHORE ISLANDS OF MARTHA'S VINYARD AND MANTUCKET

Nantucket, Mass. : Nantucket Nautical Publishers , 1977
(click for more details about THE ISLAND STEAMERS: A CHRONOLOGY OF STEAM TRANSPORTATION TO ND FROM THE OFFSHORE ISLANDS OF MARTHA'S VINYARD AND MANTUCKET)
View all from this seller>