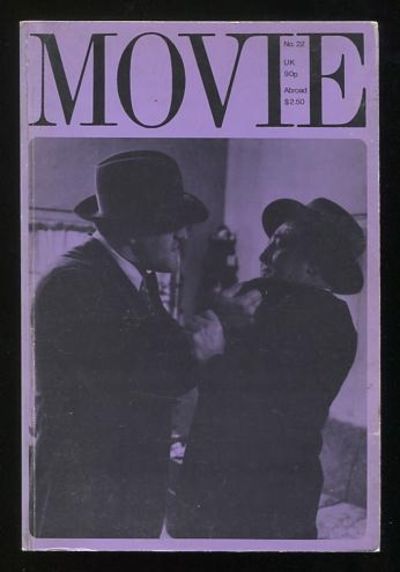 by (Cameron, Ian, publisher)
London: Movie. Very Good+. 1976. (No. 22). Journal. [modest wear to edges and extremities, vertical crease along left edge of front cover]. (B&W photographs) This issue of this well-regarded British journal of film criticism devotes 29 of its 64 pages, rather amazingly, to MANDINGO -- first with a lengthy analysis/defense of the film (which was pretty universally savaged by critics) by Andrew Britton, followed by an interview with its director, Richard Fleischer. The next section, under the blanket title "American Cinema in the '70s," discusses THE WAY WE WERE (Sydney Pollack), NIGHT MOVES (Arthur Penn), and ALICE DOESN'T LIVE HERE ANYMORE (Martin Scorsese). The issue is rounded off by three articles: "John Ford and the Critics," by Douglas Pye; "Feminist Film Criticism," by Janey Place and Julianne Burton; and a brief "Comment" by Joe Stefanos on "Television and Criticism." As always with this publication (and consistent throughout its intermittent history), you really get your money's worth: there are no ads or other clutter, the photographs don't take up an excessive amount of space, and the articles themselves are detailed and thoughtful (albeit on the academic side). [We have numerous issues of this and other film-related periodicals that are not listed online; please inquire if you have particular needs or wants.] . (Inventory #: 26294)
$30.00 add to cart Available from ReadInk
Share this item
ReadInk
Offered by

Philadelphia/New York : J. B. Lippincott Company , (c.1960)
(click for more details about To Kill a Mockingbird)