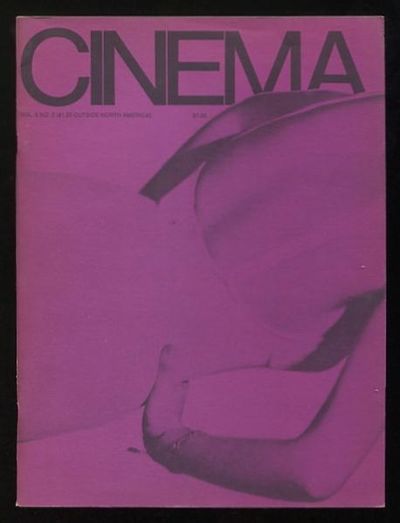 by (Lindsay, Michael, ed.)
Beverly Hills CA: Spectator International. Fine. [1969]. (Vol. 5, No. 2). Magazine. [a lovely, almost flawless copy -- newsstand-fresh, you might say, with just a couple teensy spots of wear along the folding edge of the front cover]. (B&W photographs, facsimiles) A terrific issue of this important (and well-designed) critical film journal, with a gorgeous deep-purple-tinted shot of Betty Grable -- her famous WWII pin-up pose -- that folds out (both front and rear) to four times the size of the magazine itself (approx. 35" x 12"). Contents include: "Every Young Man's Capsule Guide to The Pin-Up"; an interview with Roman Polanski; a satirical article, "Hypothetical Posthumous French Criticism," by Jeffrey Alan Fiskin, purporting to be an exegisis of the film theories of a (fictional) deceased young French critic; a discussion of the then-recently-instituted MPAA Ratings System; an article on "The Screen as a Propaganda Weapon," by Herbert G. Luft, this being apparently installment 1 (of how many?), focusing on Nazi Germany; a discussion of BONNIE AND CLYDE and PRETTY POISON; a discussion of motorcycle movies (THE WILD ANGELS, et al.), by Robert Joseph; an article by John Wilson, executive producer & director of the animated film "archy and mehitabel." Films reviewed are: GOODBYE, COLUMBUS; Brian De Palma's GREETINGS; the Maysles Brothers' SALESMAN; and Milos Forman's FIREMANS BALL. [We have numerous issues of this and other film-related periodicals that are not listed online; please inquire if you have particular needs or wants.] . (Inventory #: 26301)
$50.00 add to cart Available from ReadInk
Share this item
ReadInk
Offered by