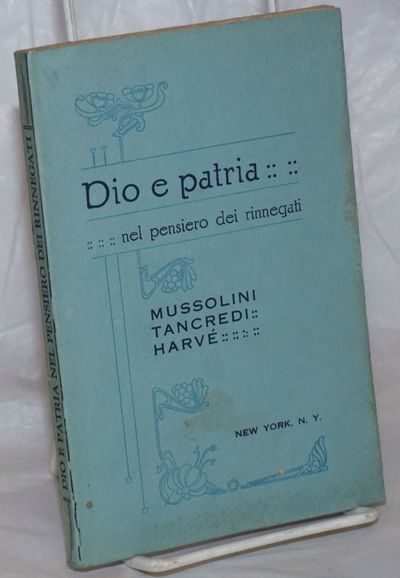 by Mussolini, Benito; Libero Tancredi (Massimo Rocca); Gustave Hervé
New York: Il Martello, 1924. 133p., paperback, wraps worn with a few small stains, staples rusted else very good second edition. "Il Martello" (The Hammer) was a weekly anti-fascist publication edited by Carlo Tresca. A collection of early texts on religion and nationalism by three former leftists who had become prominent fascists, illustrating their complete betrayal of their prior beliefs. The text of Mussolini's section is from a debate held in 1904; it notes that this book was published 20 years later, hence the estimated date of 1924. (Inventory #: 259036)
$250.00 add to cart or Buy Direct from Bolerium Books
Share this item