The VIZ Bumper Book of Shite for Older Boys & Girls; An all new VIZ adventure annual, not for sale to children. Printed in the British Empire; The Fulchester University Press 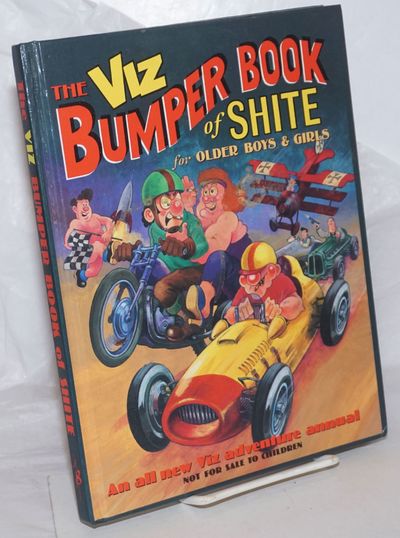 by Donald, Chris, Graham Dury, Simon Thorp and Simon Donald; et alia
London: House of VIZ / John Brown Publishing Ltd, 1993. Hardcover. 81p. plus two color plates on inserted coated stock; a melange of cartoon panels, singleton jokes, textual parodies. Hardbound in 10x7.5 inch laminated pictorial boards. A good copy: clean (i.e., no physical dirt) and unmarked. Humor a la leather-jacketed Rockers, no suit and tie Mods (unless shown getting beaten up). Much of the sex is doggie style and it is hard to tell males from females; expect faint gender bending, most nearly explicit in an introduction by "The Colonel", who starts off, "It has given me great pleasure editing this Bumper Book of Shite.. I pride myself in knowing what excites young boys. Healthy young boys like you.." Publisher line intones, "Long live the King." Fulchester U. may be an invention; Grant Wankshaft disagrees. (Inventory #: 259026)
$12.00 add to cart or Buy Direct from Bolerium Books
Share this item